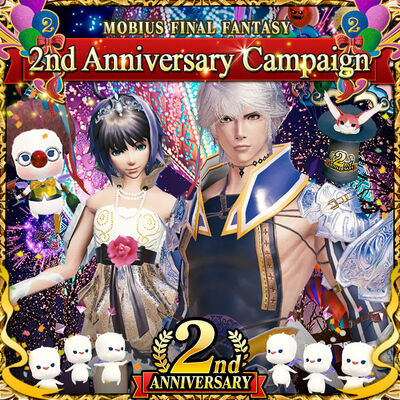 It's been 2 years since Mobius Final Fantasy started! With thanks to the over 10 million people that have played across the world in that time, Square Enix is throwing a month-long celebration! The 2nd Anniversary Campaign promises to offer valuable prizes all month long for all of the active players... and great incentives to bring previous players back to the game!

Overall, the Campaign is a collection of promotional giveaways and bonuses. There are no special event regions this year.

What's a celebration without gifts! Players can expect these to show up, just for logging into the game!

During the course of August, a second Login Bonus is available, obtainable with a daily login over 16 days. Gifts include 14

Growstars. Unlike the normal Login Bonus panel, this does not give any extra prize for completion, but players have all month to complete it, compared to the usual 18 day span.

As part of Mobius Week, players will receive a daily gift of

Phoenix Down x1. In addition, players will receive unique items for the length of Mobius Week:

2nd Anniversary Stamp: "Congrats!"
In addition, players will receive the 2nd Anniversary Commemorative Stamp if they log in during Mobius Week. This stamp is used during multiplayer combat in the Ring of Braves. Using it will allow your character to revive from death once per battle with no negative effects. "Undefeated" bonuses will stay in place, and you don't spend a

Phoenix Down doing so!

Playing solo campaign regions with one of these Companion Spirits equipped will get the player an extra Improved Extra Skill Unlock bonus, giving the player a better chance to unlock all of their Abilities' skills.

For those players who have bought the Mobius Gift Boxes, the first login will also get a slew of gifts, depending on how many months of the Boxes they've purchased.

If you're on the cusp of the next reward set, then the extra rewards will be sent to your inbox as soon as you've purchased the new Gift Box.

As a special item during the celebration, the first week of the month takes the normal bonuses of Mobius Day and stretches them out for an entire week! Each day gets you:

Rewards aren't just for existing players... they're also for new players! And as a way to bring back people who stopped playing! To encourage this, Mobius FF is staging another Welcome Back Campaign! The more players who either come in New, or return to the game after at least 30 days of inactivity, the higher the rewards for everyone!

Special Events are being promoted online, outside of the game.

Game Updates are coming! With over 2300 Ability Cards now in play, changes need to be made to the game engine. To accomplish this, there will be a game app update sometime during the month. When this hits, the game will be shut down for a few hours, and ALL players MUST update to the new app version. Once complete, new changes will include:

Players that purchase at least 1500

Magicite (with real money!) will gain VIP Mode for 30 days after the purchase. This offers extra bonuses, similar to the Mobius Gift Box:

Adaman Shell★2 or the

Wind Pneuma★4 or the

Fire Fractal★4, will be stacked in your inventory, so they only take up one slot for each material. No more pages upon pages of materials filling your Card Bank! Hundreds of extra slots freed up for Ability Cards!

The Shop menu's "Summon Cards" screen will get two tabs on it for summoning:

Newcomers are likely to have a disadvantage compared to veteran players who have been at this for up to two years! This is especially bad as more content is being designed that assumes players have Supreme Cards and Ultimate Heroes. The solution: make it easy for new players to get ahold of them!

Magicite within the first 37 days will receive two

Supreme Tickets. These can be used in the new summons to get one Ultimate Hero Job card, and one Supreme Job Card. They will also receive

Ability Ticket x240 to recruit and upgrade other cards from the Ability Shop to fill out their initial roster.

Veteran players aren't being left entirely out. Between the App upgrade date and September 1, existing players may take advantage of this offer, and use them to obtain a Supreme Card and an Ultimate Hero that they don't already have. (If a player has all of the Supremes or Ultimate Heroes already, then they'll get a

Players have 30 days to exchange their Supreme Tickets for cards. After that, the Tickets turn into

Phantasmic Loop: Endless War is getting remade as Phantasmic Loop: Endless War 2 on August 6, and will have a newer, even tougher set of boss fiends in it! As part of the change, the Profile banner showing how many loops you've completed will reset back to 0. (sorry, folks!) On the positive side, it means you can gather all of the First Clear prizes again. (get to it if you want the prizes from Loop 1 before it goes away!)

Ability Cards removed from the Shop[]

Roughly 100 Ability Cards were removed from the Summons lineup starting Aug 1, but are still available from the Ability Shop.

However, the "Dragon Quest Cards" will be removed from the Ability Shop as well, in early September, making them permanently unavailable if you don't already have them. Get them now while you still can!

If you're interested in exactly what cards a particular Summons pulls from, click the "Info" circle on the Summons banner to go to a separate web page with a full breakdown of probabilities. These will be different from one Summons to the next.