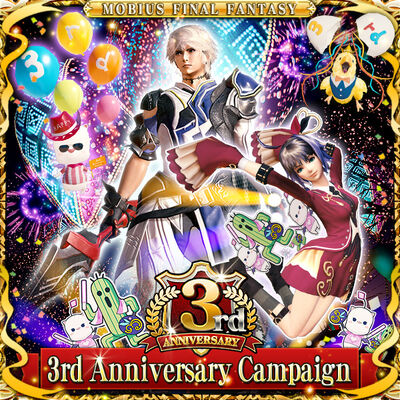 August 2019 is the third anniversary of Mobius Final Fantasy! Gifts and special events are raining down all month!

There are a LOT of straight-up gifts for this anniversary! No need to do anything... just log in each day.

Supreme Ticket x1. Go get yourself a missing Supreme Card or Ultimate Hero!

Using a ticket on the Supreme Card Summon banner will collect one previously unobtained Supreme Card at random, which can include the new Griever: FFVIII (Card). If you already have all Supreme cards (including the new one), then you will receive a

Growstar x1 and your Additional slot Supreme Card Chance counter will be boosted to 180, guaranteeing that you will land the next Supreme Card when it is released in the future.

In addition, players that purchase at least 12,000

Magicite (with real money) will receive:

In addition to the regular Login Bonus panel, players will see a second, Special Login Bonus Panel. This will give one extra prize each day that you log in, between Aug 1-17. Prizes include

Each day, the Mobius Week benefits will award

Phoenix Down x1, sent to the player's Present Box. Each day's login will also garner a specific reward on each particular day:

Some other items delivered on the first day (or any day during August, if you take a while) include:

If your character is killed during a multiplayer battle in the Ring of Braves, using of these stamps will revive your character without losing the Undefeated mark! One revive per battle, and only on yourself.

Each day for the entire month, you can perform a Card Summon of one card. No boosts, but it can catch Jobs, Supreme Cards, or Ultimate Heroes.

Depending on results from the Welcome Back Campaign, these will be increased to two single Summons per day, starting on Aug 23, for up to 8 days.

Players who have been purchasing the Mobius Gift Box each month will get an extra set of rewards, based on how many Gift Boxes they have purchased in the last 3 years:

If you're on the cusp of the next reward set, then the extra rewards will be sent to your inbox as soon as you've purchased the new Gift Box.

Each day from Aug 1-13, players will get all of the benefits of Mobius Day, ramped up even farther! These include:

New players, and returning players who have not logged in for more than 30 days, who log in between Aug 1-16 will receive:

A special Welcome Back Free Greater Summon available August 23-29 will contain 7 great cards for folks, for free! The more players that return, the better the cards! And like all Greater Summons, there's a chance to get a Supreme Card or an Ultimate Hero Job.

Special Events are being promoted online, outside of the game.

players chose the Officer Echo -- a spirit not available since fall 2016!

Done! over 5000 likes, so players received all of the listed rewards on Aug 21.

The rewards suffered from multiple issues during August, leading to some extra rewards in September.

Square Enix made adjustments to the overall game balance, with changes to a large number of cards and some base functions.

Summon Ticket x1 to all players in compensation for the 6 hours that the app was down for upgrades.

Previously, Weapon Boost would knock 3 minutes off the boosting time for each point of Stamina used in battle. (4 minutes if you have VIP Mode purchased). As of the August update, these credits are permanently doubled to 6 minutes per stamina point, or 8 minutes with VIP mode.

Effect on battles in Bahamut Lagoon are unclear.

New Feature! SE is adding a new Titles achievement system with prestige achievements for various overall game actions, such as "X number of fiends killed" or "more than X

Elixirs used". In concept, these are similar to the Trophies in Final Fantasy XII. Each Title will grant a permanent increase in your base stats.

This is a separate system from the Steam and iOS GameCenter Achievements that were used in Act 1.

See Titles for more information, and a list of known rewards.

Starter Packs are getting rebooted again! The Job Cards are staying the same from the revision 6 months ago, but the Ability Cards have all been replaced with newer selections. Unlike previous cases, current players will not be offered the new Starter Packs - they are for new players only.

Some of the Supreme Cards have had their abilities adjusted.

The 1st Anniversary Cards have had their abilities adjusted:

The 2nd Anniversary Cards have had their abilities adjusted:

The pool of potential Ability Cards for a Card Summon has reached 216 cards! Time for a culling. As of August 1, 2019, 110 cards have been removed from the Summon pool, reducing it to 106 (plus 3 new) cards.

Community content is available under CC BY-NC-SA 3.0 unless otherwise noted.