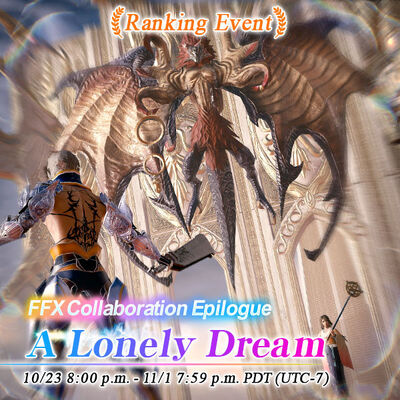 FFX Collaboration Epilogue: A Lonely Dream was a Ranked "battle tower" event available in October 2018, as part of the Final Fantasy X Collaboration Event. It featured a challenge with progressive difficulty from Yuna's collection of Aeons.

The Ranking contest concluded after its usual 10-day period. However, the region has stayed open beyond that, to act as an epilogue to the Dream Within a Dream storyline. Though it is not stated anywhere, we expect this zone to stay open until the FFX Collaboration Event closes at the end of November. 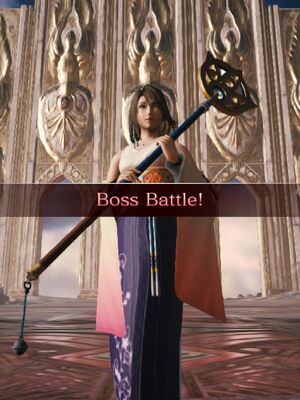 Wol finds Yuna at the Tower of Trials, apparently in a dream. If it's a dream, says Wol, then make the best of it until you wake up. If you're supposed to be the Great Summoner, let's see some evidence of it. Time for a friendly Contest of Aeons!

Flashback: Yuna appears in Zanarkand (or Palamecia's equivalent) and spots a familiar Blitzball player... except this one has platinum hair. It's Wol, in the Ace Striker outfit. He's not clear where he is, or how he got here. Maybe he's dreaming, or maybe Yuna is dreaming him. It's all too similar to a previous experience of hers. Wol might have been part of that experience, but Yuna is pretty certain he wasn't there. Still, Wol feels oddly familiar to her.

Wol question if it's a Summoner's intuition, but Ynua says she's not a summoner anymore. She had to destroy them to save her world of Spira. It was pretty harsh, and she hopes they understand. But if it is a dream, then it should be easy to ask them directly... by summoning them in the dream! Off to the Tower of Trials.

At the Tower, Yuna summons Valefor, and Valefor comes! It's obvious that Valefor is kind and understanding, making Yuna happy. It's a great opportunity to see the two of them in action, so Wol challenges them to a friendly Contest of Aeons! Yuna accepts.

The contest is a gentle one, with Yojimbo, Ifrit, and Shiva easily taken down. But Wol feels that Yuna is holding back. She just keeps smiling while they're fighting. Wol wants her to get serious and let loose. The next round with Anima is much tougher, but it's still not all she can do. Wol pushes for her top effort with Valefor, and manages to overcome the two by the skin of his teeth... and his own developed Summoning skills! 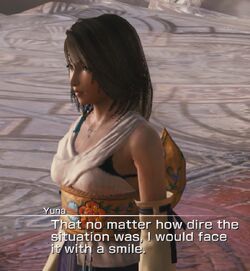 Yuna congratulates Wol on his victory, but Wol is disappointed he couldn't get the smile off her face. She points out that the role of a Summoner is to bring hope to the people, even when all seems dire and lost. So Yuna vowed to always smile, regardless of how hopeless it might be. It's a lesson of sorts, for the man who never smiles! Yuna is okay with that, given that she has someone who will always have a smile for her.

In a quiet moment afterwards, Yuna goes back to Palamecia's version of Besaid, where she reflects on life without Tidus. She's happy to have the chance to dream about him, and looks forward to waking up to a future with him in it.

Thus ends the story... and leads into Final Fantasy X-2? Who knows?

You will be using the Summoning System in this contest: your normal Sub-deck is not available. Instead, the Job Change Recast action will allow you to summon an Aeon, with a pre-set list of Abilities. See the Summoning section of Dream Within a Dream, Episode 3 for details. If you have not gathered any Aeons through Episode 3 or Episode 4, you will be given Valefor as a basic Aeon to use in the journey.

Yuna appears to the side of the Aeon, and casts spells of aid on the Aeon in the center areas:

While Yojimbo's dog Daigoro is present, he's not casting any spells. Only Yuna is. Like Daigoro, Yuna is not targetable, and area attacks do not affect her. 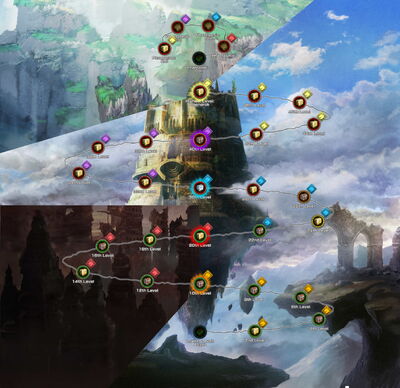 There are 31 areas and 26 treasure chests. Since the last treasure chest regenerates on each pass, the region technically cannot be Cleared.

The "ladder" consist of 50 levels, but only 25 actual areas. As you progress, previous areas become inaccessible -- you can only go up. The center areas (10th, 20th 30th. 40th, Ragnarok) contain much stronger Aeon enemies, where your own Aeons will shine.

The Phantasmic Coil has Pure Elements, who cast Elemental Lockout on you (like

Fire Lockout), and a 3-turn Element Drive on all of your foes in all of the other elements. The lockout can be a problem if that's your Aeon's element, but otherwise your Prismatic Generation should keep any spells in the locked element still going.

All players who clear the region (up through Ragnarok) will receive a special Companion Spirit.

All music comes from the Soundtrack to Final Fantasy X Remastered.