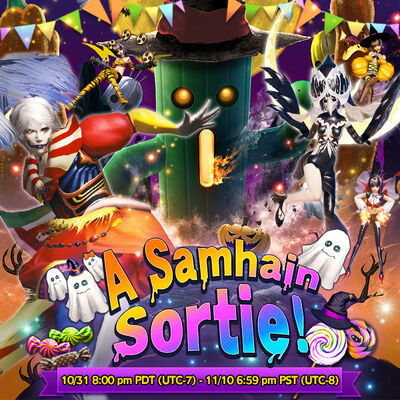 A Samhain Sortie is a special Halloween "ranked" event for Mobius Final Fantasy, featuring a challenge against the Jack O' Tender and the Halloween Cactuar for rewards.

While this is a special Holiday event, the region plays like a typical Ranked Event, but without the Ranked tracking or rewards. There is only a single path of progressively harder battles, with standard area rewards.

Go to A Samhain Sortie region spot on the Act 2 World Map.

The Echoes are having a meeting. There's a problem -- one of the local mountains has too many fiends on it to put up Halloween decorations! It's a disaster... but the Halloween Echo has a solution! With a portentous "Trick or Treat!" she changes into the Plague Doctor Echo, and introduces the hero! A man who strikes fear in his enemies, and loves doing menial monster-slaying!

Wol steps up and points out he hasn't said yes yet. Such happy volunteering sounds a lot like another Echo he knows... er, knew. Might this be the Echo he remembers? The Plague Echo points out they're really all the same, so there's no way to tell.

Okay then, what if Wol doesn't help? Then Halloween is cancelled... and the tricks and treats shift to Christmas and New Year's celebrations. How terrible. Very well, there's slaughtering to be done.

Play in this area works through a single chain of levels, from the beginning Halloween Special area up to the top Pumpkarok area. As you work your way up the path, the battles at each level will get progressively harder.

The Jack O' Tender summons a set of common fodder in that area's element.

The Jack O' Tender summons spirits that take your elemental orbs, and give you boons in return.
If you don't have any orbs to offer, then bad things happen. (not really. You still get boons.) 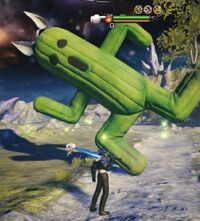 The Cactuars get an interesting new mechanic. Four normal Cactuars appear, along with a much tougher "costumed" one in the center. At the start of battle, the five Cactuars fuse together into a Halloween Gigantuar! If left in this state, it will eventually cast an extremely damaging Ultimate attack. (In the Phantasmic Loop, this is an instant kill.) If you break it, it will separate back into its component Cactuars on its next post-break action.

Similarly, when the Cactuars merge again, the Gigantuar gets the average of the surviving Cactuars. 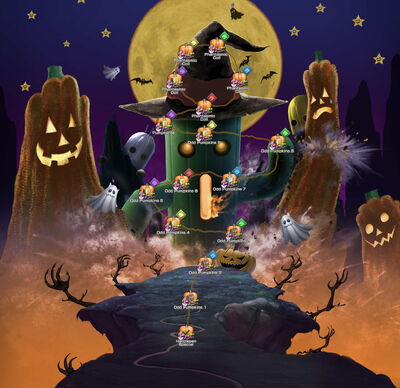 The region has one path upwards, leading up to the top at the 10th "Pumpkarok" level. You cannot return to previous areas once they've been beaten.

After completing the Pumpkarok area, you enter the "Phantasmic Coil" areas. This is a set of 5 areas that repeat in an infinite loop, also with an increasing difficulty with each area finished. On these levels, there is no fifth Rental Card allowed, and if you lose, you cannot use

The five levels after Pumpkarok are set in an infinite loop, with a prize on the completion of the fifth area on each loop. Players cannot use

This event is NOT a Ranked Tower battle, so there are no rewards for continuing on the Phantasmic Loop besides the

Ability Tickets. Keep going for your own enjoyment.

This event was originally offered as a Ranked Event in Japan over Halloween 2018. With the transition to Global, this event coincides with The Transient Sorceress event (part of the FFVIII Collaboration event), so this is being handled as an extra event without the Ranked Rewards or tracking. 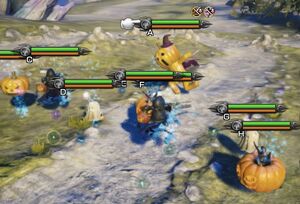 Treat fiends! These take your existing skill seeds, and offer boons in exchange.

The region plays a song that includes dialog from the Japanese voice actors for Echo and Wol.