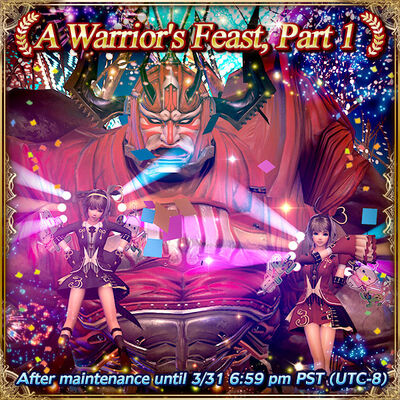 A Warrior's Feast, Part 1 is a celebration of the end of Act 1 in Mobius Final Fantasy. The region includes many of the characters and foes that have appeared in previous Mobius events since the beginning of the game, including Gilgamesh and more.

The event was regarded as the 3rd Anniversary in Japan, so many of the graphics are styled with "3" motifs. 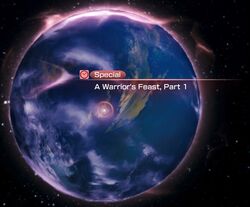 Go to A Warrior's Feast, Part 1 region spot on the Act 2 World Map.

Wol found an unknown rune and touched it... and it brought him to the Anniversary Grounds! It's a setup. Multiple Echoes (decked in Rouge and Azul celebration outfits) have planned an extravagant party to celebrate Wol's defeat of Chaos, and everyone is here. Blanks, Gilgamesh, Moggy, and who knows who else!

The Echoes have their own song, too (in Japanese). Wol, of course, just rolls his eyes at the whole proceedings, but there's no way the Echoes will let him go now... there are festival games to be played!

First up: Drawing. Wol isn't much of an artist, but Echo suggests waving a brush around like his weapons. Something good should come out. What does come out is... certainly an expression unique to him.

Next up: Targets! Can Wol aim well? Wol is surprised it would be so simple. Of course it isn't, but he bests it anyway. Echo proclaims it's such fun, even the enemies are having a blast! So, does that mean the fiends are in on it all? Sure, says Echo. Who wouldn't want to be bested by the famed Warrior of Light?

Over on the east side, Wol finds Omega waiting, but not to attack. Echo explains that Wol gets to fire Omega's Wave Cannon himself! But it's going to need some powering up first. Wol's up for an interesting side show, and wallops Omega with some of his most damaging abilities. The resulting fireworks are spectacular!

Finally, Wol runs across Leviathan... and the water Sicarius wants to play! Echo hands Wol a traditional Japanese fish-catching paddle, and tells him to protect it from Leviathan's attacks. It's a bit cagey, but Wol dodges enough of Leviathan's attacks to get the paddle to the end relatively intact. 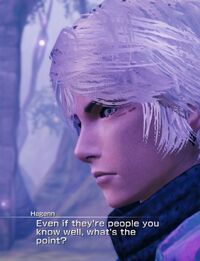 Wol tires of the whole affair, and paces off on his own, but his departure is noticed by a platinum-haired Echo. She asks why he would leave a party in his favor. Wol counters that the party is for the Warrior of Light... not him. But he is the Warrior of Light! He doesn't agree. She asks if she can accompany him, and he assents.

On the edge of the festival grounds, the Echo Rouge catches up with Wol. He's missing all the fun... and the guests are clamoring for him! Wol notes that he doesn't like crowds, and as a Blank, he's not that big on reminiscence. But... says Echo, how could the Warrior of Light deny his fame? With heavy irritation and some depression, Wol states he's not the warrior of anything... and paces away.

To be continued in A Warrior's Feast, Part 2 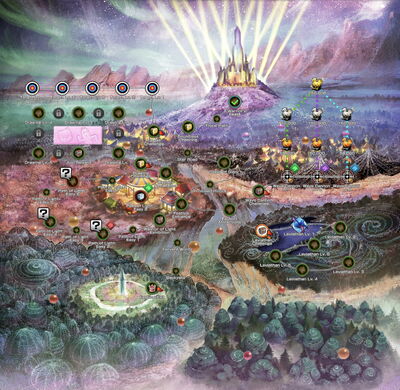 The region has a number of sections devoted to specific "festival games": Drawing, Targeting, Wave Cannon (damage up!), and Leviathan (protect!).

There are 53 areas in total, including 9 (repeating!) treasure chests.

Meet the listed requirements to unlock the next area. If you fail one, you will start the section over again! Most are easy, but drawing 4 Life Orbs takes either a good bit of either luck or abilities with Life Draw.

Once you clear the loop of five and take the prize, the areas are replaced by five more, which are much harder, but the resulting prizes are better.

One fiend will be marked with a Target icon. Kill that one -- and only that one -- to advance to the next area. Take single-target Abilities -- most any damage done to the non-Target foes will kill them, losing the fight! The target will have an extra "Super Defense" boon of 8 points on it, preventing damage. Each hit it gets will reduce that counter by 1, so just keep hitting it... and be prepared for the damage inflicted by the other enemies.

Beware, because the target will frequently shift to a different enemy! When it does, the new target gets a new set of Defense shields.

As with the other games, if you miss, then you'll have to start the section over again. Once you complete the five target areas, they are replaced with five harder areas, with better prizes.

You have three turns (about 30 actions) to deal as much damage as you can. Deal the maximum amount of damage listed to continue on. You'll want your best spells and ultimates in the opposing element, and lots of extra damage if you can break Omega. (good luck)

You'll need to deal at least 250,000 damage on each of the three areas, which gets you both the Bronze and Silver prizes. Do that much damage on all three areas to get the final Gold prize. Once you complete the challenge the first time, it will reset with three harder spaces, for another try. These will require 2,000,000 damage to advance on each area... and Omega throws obstacles in your path! (

You need to protect a package from

Leviathan (Sicarius). Each time Leviathan casts Waterja, it damages the package. The package can endure 2 Waterjas in total... across the entire 6 areas! If the package is damaged 3 times in total, or 2 times in any single battle, then the package is destroyed and you'll have to start the section over again.

As with the other games, once you complete the six areas, they are replaced with six harder areas, with better prizes.

Most of the fiends you meet are specialised ones holding glowsticks. They do not have any attacks, preferring to give congratulations and "Party On!" messages.