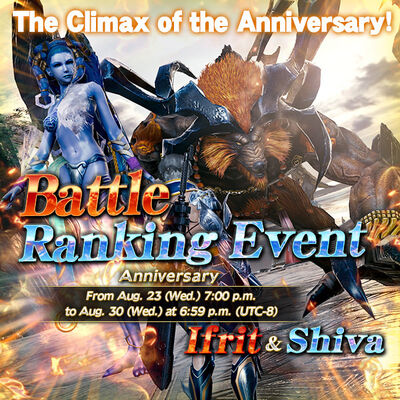 Anniversary Ifrit & Shiva is a Ranked "battle tower" event available in August 2017, as part of the Mobius First Anniversary celebrations. It features solo battles against Ifrit and Shiva.

Echo and Meia are at it again... plotting a special treat for Wol. This time, they've both conjured a Sicarius for Wol to fight. That's a surprise: Echo can summon! Maybe she's been learning from Meia. This will be fun.

Okay, maybe not so much. Echo confesses she just went through the motions, while Meia did the real work. Wol is not surprised. Echo says she cares what Wol says, though, which does surprise him -- he'll have to remember that for the future.

Wol smacks Ifrit and Shiva down in record time. The two ladies are disappointed, and promise to make conjure even harder for Wol next time.

The progression is split between two paths: 9 areas on the left against Ifrit, and 9 areas on the right against Shiva. Like other Battle Towers, these enemies start easy and get progressivly harder as the player advances up the ladder. Once the player finishes the 9th area on both paths, the 10th area opens, with a final battle against both Ifrit and Shiva.

After completing the ladder, the player enters the "Phantasmic Coil" areas. This is a set of 5 areas that repeat in an infinite loop, also with an increasing difficulty with each area finished. Ifrit and Shiva alternate for the first four, and team up again on the fifth.

There are 25 total areas and 20 treasure chests. Since the last treasure chest (in the Phantasmic Coil) automatically regenerates, the last chest can technically never be completed.

Ifrit and Shiva drop Claws and Armor to upgrade their namesakes in the Ring of Braves. In the Phantasmic Coil they drop Quartz. Other fiends you face may also drop their own cards.