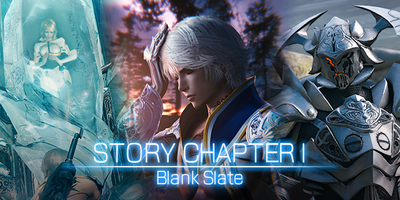 Blank Slate is the first story region in Mobius Final Fantasy. All players begin their adventures in this space. It features the introduction of Wol as the main character, and the supporting characters Vox, Garland, Mog, and Sarah Cornelia. Players are given the basics the world of Palamecia, and The Prophecy surrounding the Warrior of Light.

A Hard Mode version of Chapter I: Blank Slate was available from May 9, 2017 to Dec 17, 2018. The story and events remained the same; however, the enemies and battles were strengthened for added challenge. Additionally,

Crystal Gigantuars had a chance of appearing in battle as rare fiends.

Players are isolated to this region until they complete the Runic Temple Basement area. Once this is done, the World Map becomes available, which allows traveling to any of the available Regions. Once this is opened, new players are highly encouraged to make use of the Novices' Hall and New Player Summons before continuing. 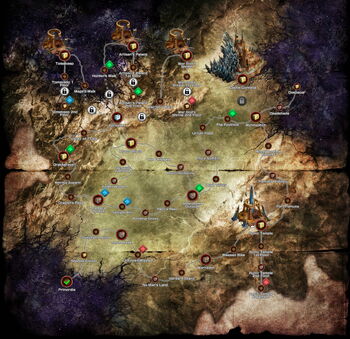 The region is fairly simple, with a few side branches as you're required to fill "quest" goals. As you travel, new areas will appear, showing you:

Their state
A green check mark will appear once that area has been cleared. (you've battled it and won)
The difficulty
Blue is trivial. Green is easy. Yellow is middling. Orange is tough. Red is formidable. These are based on your character's Ability Level, and may not directly show how truly difficult (or not) they are. This does directly affect how many Skillseeds you earn, since the difficulty applies a multiplier to your earnings.
Treasure
The area icon shows a wooden treasure chest for mundane items, silver for better items, and gold for great items. Most valuable are the blue chests, which hold

Crystals; used for upgrading your jobs and weapons with better stats.
Teleport
Once you've cleared an area, you can quickly jump back to areas with a large icon using the Teleport button at the top of the map. You can teleport FROM the small area icons, but not TO them, so it behooves you to continue a particular path until you clear a large icon area.

These areas can only be accessed following the completion of Castle Cornelia.

The story begins with an unnamed male warrior drifting through a dark void surrounded by flying lights. As he drifts, a voice speaks to him, asking the warrior if he remembers who he is. The voice states that the answer to that question means nothing in the world where he is heading. The warrior is carried along the stream of light that heads towards a planet. The voice reveals that the name of the planet is Palamecia, "a world unbound by hope". The voice then introduces itself as Vox, claiming to be a guide and hopefully "a dear companion" to the warrior.

The warrior finds himself washed up upon a dark shore surrounded by a purple glowing sea. All around him are empty rusted suits of armor. The warrior picks up a sword (Blank Blade) and notices there are other armed men who have seemingly arrived on this shore the same as him. Before they can interact, a creature emerges from the purple sea, sending the other men running in fear. Our character readies his sword as Vox's voice manifests and tells him of the first Law of Palamecia: "None shall remember the names of those who do not fight".

As the battle ends, Vox's presence manifests as a light in the sky. He asks the men before him to speak their names. To everyone's surprise, all the men gathered (including your character) find they all share the same name. (we'll use "Wol") Vox states that their names are quite special, for it is foretold that a hero bearing that name will bring hope to the doomed world of Palamecia. Each of those bearing that name have the potential to become the renowned Warrior of Light, but only one of them may achieve this. Vox urges those gathered, the blanks, to head North.

As Wol travels along, Vox states that the Laws of Palamecia will constantly test the strength of those who would become the Warrior of Light, through battles and trials. Wol, growing increasingly irritated with the voice, asks that Vox remain silent.

But a strange man, clad in unusual heavy armor and bearing a great red sword, encourages Wol to heed Vox's advice. The strangely armored man introduces himself as Garland, and states his purpose is to temper the steel of those who show promise in becoming the Warrior of Light.

Wol carries on and eventually arrives in much more pleasant area with sunlight, fields and trees, which reminds him of home. - a home he can't remember, but this feels familiar. On the side of the road he notices a small white creature collapsed from exhaustion and menaced by fiends, pleading for someone to help him. Garland urges Wol to rescue the moogle, noting that all moogles can share their memories with each other. A rescue would be helpful to his journey. Wol doesn't care so much, but just leaving the creature to be killed by fiends wouldn't be right. He quickly fights off the fiends. The moogle introduces himself as Mog, and swears to help Wol on his quest as a means to repay the debt of saving his life. The two set off for the nearby town of Warhaven, while Garland goes his own way.

As they travel, Wol asks Mog about Vox and Garland. Mog states that he does not know of Vox, but knows that Garland is considered a heretic. As they reach Warhaven, they run into a group of adventurers who have just slain some fiends. They appeared elated by the thought their battles may have contributed to Palamecia's safety. One even hopes that Vox was watching their efforts. As they walk on, Mog reveals that many men lose themselves in the feeling of a victorious battle, eventually becoming slaves to it. Others try to fill the void in themselves with a sense of duty, such as protecting Warhaven, and argues that such things distract from the Warrior's Path.

The two reach their first destination: the Runic Temple. Inside is a Runic Crystal that Wol must unseal, as dictated by the Prophecy. A Red Dragon stands in the way, but Wol takes it down. Upon touching the Crystal, Wol is greeted with a projection of young lady, who Mog introduces as Princess Sarah Cornelia. Mog tells her how Wol saved him earlier. Princess Sarah believes this too was as ordained in the prophecy, stating that "For he shall walk with a moogle not behind him, but at his side." She states that those who would be the Warrior of Light must choose to willingly walk the path. Wol agrees to do so. The princess then bestows upon him the Boon of House Cornelia: the ability to teleport to certain previously accessed locations and to use the Teleport Stones, and asks him to come to Castle Cornelia.

As they leave the Runic Temple, a shining orb of light appears before him and forms into a fairy, introducing herself as Echo. She too will accompany Wol as a guide. He refuses, stating he already has enough guides, but eventually gives in. Echo lets him know that only he can see or hear her. When Wol asks Mog about his knowledge of Echo, Mog states that Echo is well known as the field faerie. She promises to guide warriors to great treasures, but these are lies. Many have followed her into peril and death. Beware! Mog also tells Wol of how all the fiends of Palamecia exist because of the being named Chaos. It is Chaos' will to spread suffering and anarchy throughout Palamecia.

Wol finds a Cockatrice and tries to kill it, but it escapes, wounded.

The duo eventually catch up with Garland, who advises Wol to be wary of women... especially royal women such as Princess Sarah. He may have a grudge. On the path, they run into a pack of Blanks who surround Garland. They are being commanded by Vox to "kill the heretic". Garland cannot hear Vox's voice. Nevertheless, he scatters the blanks before him with a single energy blast from his sword. Garland explains that he would not follow the words or guidance of Vox, and for that he has been branded a heretic.

As the trio reach the castle gates, two guards inform the party that the castle gates are closed, and will remain so until a mad Cockatrice prowling the land is slain. The party hunt the giant bird, chasing it to the western mountains, where Wol properly slays the beast.

They arrive at the castle, or the the ruins of it. The place is long abandoned, with no princess within. The guards still protect it since the duty gives them some purpose in life. Princess Sarah is to be found in another location in a far away land. Within the ruins, Wol comes across an ancient looking portrait of the princess Sarah. Upon closer inspection, and notes the overwhelming stench of mold. This disturbs him and encourages him to move onward as soon as possible.

At the top of the castle Wol finds the local Teleport Stone. Mog informs him that it will transport him to Crownforge: a land where the sun shines long and bright, and where Sarah lives. With a touch, Wol is on his way. As he travels through the dimensional void, he mulls over all that he has learned, and notes that whether he likes it or not, he is being drawn further and further into the world of Palamecia.

Wol returns to the Plains of Cornelia, hoping to further hone his skills. He decides to travel past the Castle to a more hazardous area. Echo offers to guide him to three temples; Tomekeep, the Artisan's Palace, and the War God's Shrine; claiming that at the bottom of each lays hidden power, but warns him that the journey is dangerous. Wol agrees, but stays wary, given the rumors of danger surrounding Echo.