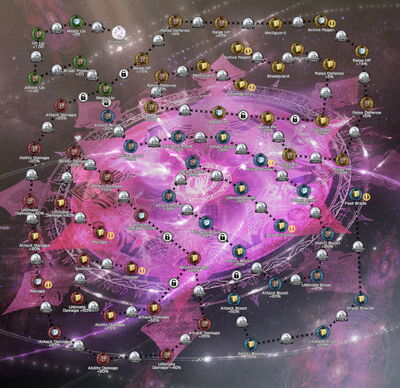 The Crystarium is a support region used during the Final Fantasy XIII Collaboration Event. It is accessible only through the Lightning Resurrection, Part II region.

The space is an analogue of the character development system used in Final Fantasy XIII.
Here, the space is used to upgrade Wol's paradigms as extra bonuses to be used in battle during the event.

Many of the areas include extra effects, in place for the length of one combat. These are automatically applied, but can be dispelled by player Abilities.

This area has 66 areas. All areas (except for the starting point) have a CP cost "lock" and a treasure, in addition to the paradigm boost.

The original run of this event in Oct 2017 used a different map than the one displayed here, but the areas and the progression remain the same. Area rewards have also been upgraded with the new run of the Lightning Resurrection event. (current rewards: April 2018)

The Crystarium is accessed from the Lightning Resurrection, Part II region by clicking on the CP icon in the corner of the map screen. Every path in this region is a "locked path", and requires

CP (Crystogen Points) to unlock it. Unlike the region's namesake in FFXIII, the player will also need to battle through these areas to collect the enhancements.

Areas in this region come in a particular colour, depending on which paradigm it enhances: Red for Commando, Blue for Ravager, Yellow for Sentinel, and Green for shared across all three. White areas give rewards, but no extra boons.

You can return to the Hanging Edge by clicking on the green CP icon in the corner of the Crystarium map window.

Community content is available under CC BY-NC-SA 3.0 unless otherwise noted.