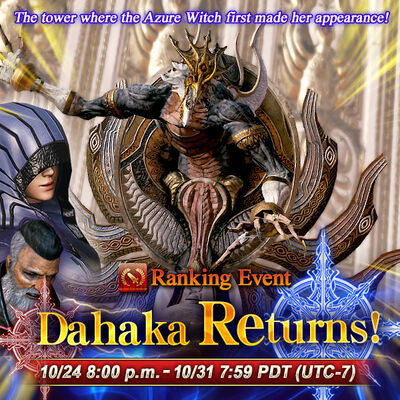 Dahaka Returns! was a Ranked "battle tower" event available in October 2017, featuring solo battles against Dahaka. The battle is a successor of sorts to the Dahaka Assault event of a year earlier.

Note that this is the same storyline as from the original Dahaka Assault tower.

Wol is back to the Tower of Trials, where Voyd continues to goad him about whether he's any better than the countless other Blanks he's seen. Wol is only too happy to prove him wrong.

A few battles later, though, Wol finds Voyd against the rocks, dying. He's been attacked! Voyd confirms that Wol is indeed the chosen one, and laments he won't be able to see what comes of it, before he expires and discorporates. Even though he's a shadow and can't technically die, someone has deliberately done him in. The hunt is on to find his killer... possibly before that person or force strikes at Wol, too.

At the top of the tower, we find our answer: a mysterious hooded woman, who summons Dahaka and flees. Wol and Echo are left with no information on who this person is, and have no further way to chase her. They'll just have to wait for her to show up again.

The ladder is composed of 25 steps up, with each step progressively harder than the last. There are two possible paths:

Dahaka is the last foe for every area.

After completing the ladder, the player enters the "Phantasmic Coil" areas. This is a set of 5 areas that repeat in an infinite loop, also with an increasing difficulty with each area finished. On these levels, a Prize of

There are 31 total areas and 6 treasure chests. Since the last treasure chest (in the Phantasmic Coil) automatically regenerates, the region can technically never be completed.