Dream Within a Dream, Part 4 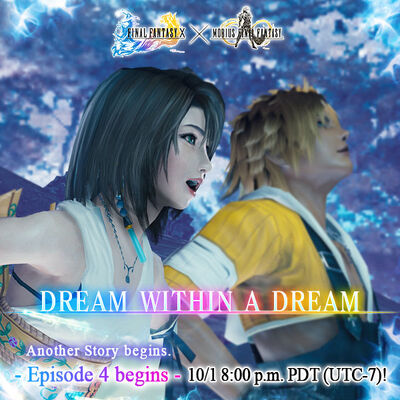 Dream Within a Dream, Part 4 or Episode 4, is the penultimate story chapter for the Final Fantasy X Collaboration Event. It features Tidus and Yuna from Final Fantasy X returning to Macalania Forest (or Palamecia's equivalent) to help Tidus regain his confidence.

Continued from Dream Within a Dream, Part 3 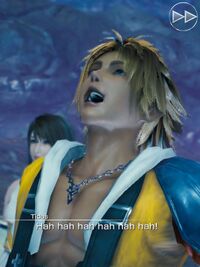 Yuna and Tidus have arrived at Macalania Forest, accompanied by Wol and Echo. Palamecia has declared Tidus and Yuna to be heretics, ending their quest to be Warriors of Light. Tidus is despondent, so Yuna has brought the gang here, where important memories for the two of them were first made. Yuna reminds Tidus that this isn't the first time they faced no hope and no direction... and they got through it. Here.

It's not just Palamecia out to get them, though. Yojimbo has followed them here, and attacks. But surprisingly, his target seems to be Yuna alone! The mercenary is beaten back, but we have a new mystery on our hands. 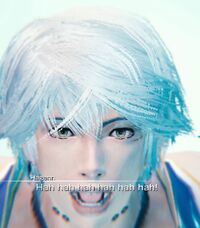 A stint of Butterfly Chasing gives the group some respite, and reminds Tidus that the two of them need to practice laughing. It's a weird sight to Wol and Echo, but it does seem to lighten Tidus' mood... at least publicly. Echo wonders if it's something Wol should try, and Wol rises to the challenge. The result is... terrifying.

Progressing down the path, they run into a wall of ice. Shiva has come calling. With his usual regularity, Wol goes through Shiva's trials, and obtains her as his third Aeon. But it's all leaving Tidus cold. He goes on ahead, without the others, to clear his head.

The group catches up with Tidus at the center Holy Spring, still contemplating his existence. He seemed to have a grand new story ahead of him, with Yuna at his side this time. But Palamecia has branded them as heretics, ending that story. So now what? Yuna tells Tidus that they could stop trying so hard, until they figure out what's next. Tidus dreams of restarting Blitzball on this world, with a full set of teams... then declares that as much of a fantasy as being the Warrior of Light. He swims off alone.

On shore, Wol points out that such advice doesn't help Tidus. Quite the contrary -- Tidus needs a hard goal. Yuna is puzzled for a second, then understands that the real Yuna would know that, and wouldn't have given such advice. 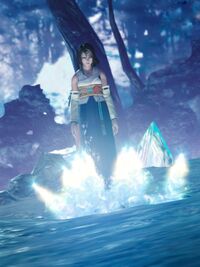 Yuna changes into Valefor, then dissolves in a cloud of pyreflies. Looks like Yuna was never really there at all. Wol gathers Tidus and tells him Yuna is gone, but he dashes off before Wol can say anything more. Wol better find Yuna first, then. Too bad she's on the other end of another set of trials.

The trials go smoothly, and Wol catches up to Yuna. It's unclear just what this entity is, but it insists that it's trying to make things better for Tidus. Wol and Echo are unconvinced, but will allow it to stay as long as it confesses the truth to Tidus. Now to go find him... again. Luckily, they hear a sharp whistle from the distance. Tidus is trying to call them! Yuna answers, and they set off locating him.

As they hunt around the woods, Yuna emphasizes that her goal is to make Tidus happy, and hits on an idea: return him to Spira. But that's not possible... is it? She states that since they've been declared Heretics, the Laws of Palamecia want them out. That may be enough of a loophole to escape, somehow. That would be just the thing to keep Tidus together, so the group agrees that they shouldn't breathe a word about Yuna's true nature to Tidus.

They finally catch up with Tidus, and Wol prods Yuna. The two of them can go back to Spira. Her best theory is that Palamecia and the Farplane overlap, out on the farthest edges of Zanarkand. That's enough for Tidus. He may not be able to save Palamecia, but he can protect them, and get the two of them home. Filled with hope, the band sets off back to Zanarkand.

To be continued in Dream Within a Dream - Conclusion.

Go to the Sphere Grid through this control.

This shows the list of Spheres you've collected, that have not been activated yet.

Shows you the effects of everything you currently have activated. Use the icons on the top bar to switch between your character enhancements and the Aeon enhancements, or filter between different enhancement types.

Lists the Aeons you have available, and shows their total attributes.

This region continues the Summoning System. The Sub-deck that normally holds your second (backup) job is replaced by one of the Aeons from Final Fantasy X. 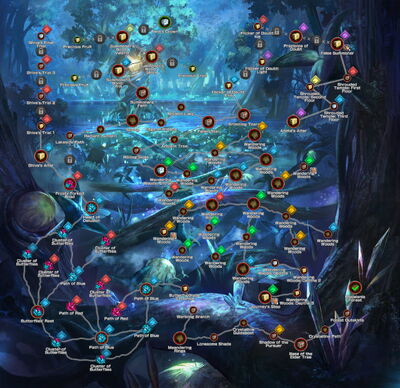 As you traverse the region, you'll receive Spheres as a reward, which you can use in the Sphere Grid and Aeon Sphere Grid to enhance stats and add extra Auto-Abilities. The fiends will get stronger to compensate for that, so be prepared for some heavy fighting!

There are 83 areas in total, with 39 treasure chests.

The first half of the map has a Butterfly Chasing section. In here, your objective is to "follow the blue butterflies"... that is, only kill the

water-based fiends. You can damage the

fire-based fiends, but killing any of them will fail the area and return you to the last teleport point. This gets tricky, since many of the areas will mix strong water-based fiends with weak fire-based fiends. A regimen of single-target abilities will be an absolute necessity, and Summoning Ifrit may help.

A few areas will contain a skirmish that consists entirely of fire-based fiends. These are not winnable, and indicate a wrong way. Find a different path. 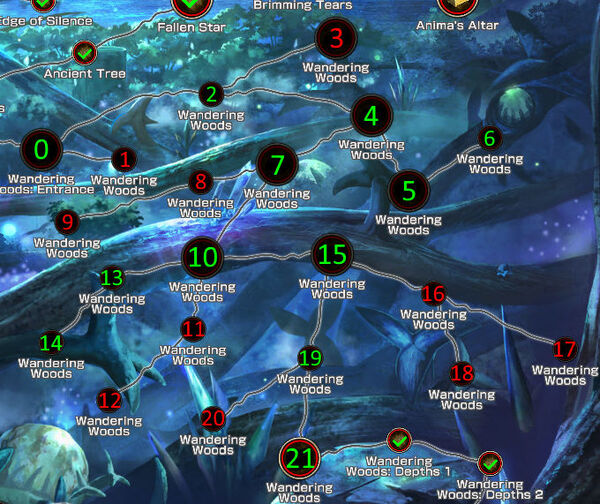 As you traverse this section, you will be working to get closer to Tidus' whistling. Choose those areas where the whistling is stronger to reach the completion. If the area you choose is farther away, it will be a dead end.

Once the story is complete, the final section opens, offering a higher challenge. These areas are meant to test your ability to direct specific Aeons (Valefor, Ifrit, or Shiva). Each challenge has a reward level after it. Once you have conquered all three challenges, the path is opened to obtain Anima (Aeon).

These items are gathered to unlock spaces on the Sphere Grid and Aeon Sphere Grid.

These items unlock paths in Macalania.