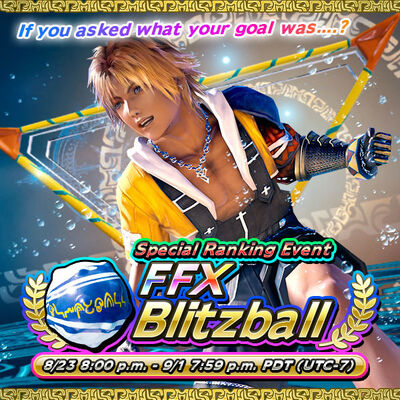 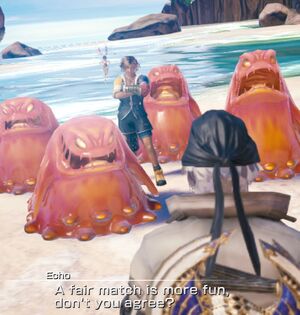 Tidus is on the beach, and still seems glum... until a blitzball bumps against his leg. Wol is challenging him to his own game! That certainly perks him right up.

Tidus gives a basic explanation of the rules, which Wol translates in typical style: stronger player wins. Don't be so sure about that, says Tidus! To even things out, Echo decides to give Tidus a hand by conjuring extra fiends for Wol to fight. Game on!

Wol is a quick study, and is able to make a goal against Tidus fairly swiftly, so Tidus steps up the effort. While they're at it, Tidus reflects on his father, Jecht: a man with a natural talent for the game. Jecht never had to push himself. He just sailed through the game and everyone loved him, much to Tidus' annoyance. It gave Tidus all the motivation he needed in his push to out-do his old man.

After a few more goals, neither one is holding back. It's an exhilarating contest. Both of them put their all into it -- not in a bitter rivalry, but with a full enjoyment of the fun of competition. And in the end, Wol emerges victorious.

Tidus notes that he's had a decent amount of regret in his life, which was its own motivation, but he never let it rule him. Rather, it helped define him. He could stand to let that out a bit more, but he's completely unapologetic about who he is and what keeps him going. Nobody can belittle that.

When players first arrive in the region, they are automatically gifted three special play cards:

Players are expected to make use of these cards during the event. Playing with other, more normal Ability Cards can be done, but the Flans have such a high break defense that it's almost always easier to use the blitzball cards instead.

There is also a super-strong

Slow ailment in effect on players throughout their time in this region, limiting the player's actions to 4 per turn regardless of Abilities or Boons. This is true of the enemies, too, so

Tidus and the flans have a weakness to one particular action: Pass, Dribble, or Tackle. If you hit them with that weakness attack, the enemy will be hit with vastly more damage. (Non-weaknesses will do normal breaks and damage.) You'll need to work out which attack to use on which enemies to get through this to the end. Be aware, though, that flans will leave you with an extra ailment if you kill them in this manner. 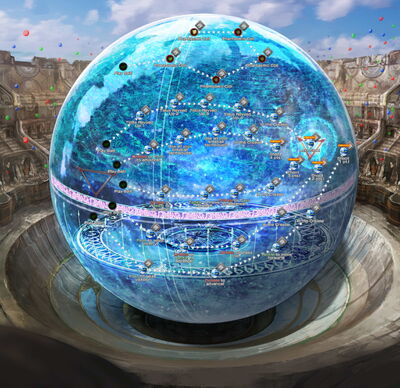 The path is a set of five runs to the opposite goal, each with five areas. As you go, the task gets harder.

Like most Ranked Events, there is only one allowed route, and previous areas close once you've cleared each one.

After completing the five goals, you enter the "Phantasmic Coil" areas. This is a set of 5 areas that repeat in an infinite loop, also with an increasing difficulty with each area finished. On these levels, there is no fifth Rental Card allowed, and if you lose, you cannot use

There are 37 total areas , with only 1 treasure chest at the end of the Phantasmic Loop. Other prizes are considered Story Completion rewards.

All areas have these effects in play at all times: