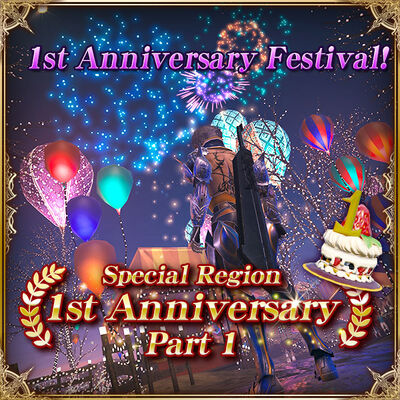 First Anniversary, Part 1 is a celebration of the first year for Mobius Final Fantasy. The region includes many of the characters and foes that have appeared in previous Mobius events since the beginning of the game, including Chocobos, Gilgamesh, PuPus and more. 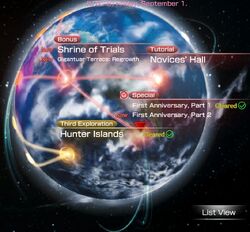 Go to the Anniversary region spot on the World Map -- part of the red "specials" section. (You must have completed Chapter 1 to see this.)

It's a celebration, complete with festival booths and fireworks. Echo claims it's all about Wol... which sounds a bit strange, given the number of other blanks that are there. Wol can't easily accept this. Since he's a blank, he has no idea if this is a birthday or anniversary... or for that matter, how old he is. But Echo does mention there are presents, which gets his attention. Echo confesses this is actually the Sacred Birth Festival - a chance to put away the past and start fresh, and make merry in the process. 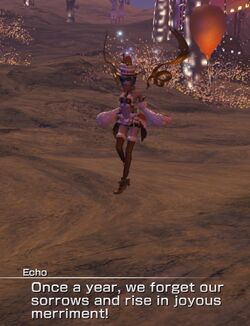 Echo is in a reminiscing mood. She thinks back to the day the two of them first met. Wol, as usual, still wonders if that could have been avoided. Echo then announces that there are many special guests lined up for the festivities! First up: the PuPu. "All are welcomed in Palamecia", Echo says, "including alien invaders." But they come with a surprise: they're evolving, and learning how to speak Palamecian! Wol obligingly beats them up.

Next up is a reunion with Gilgamesh. Gilly has a great new retro idea: dialogue through text boxes. Just like the good old days! Wol won't play along, and a disappointed Gilgamesh turns out to be easy to defeat. Wol's prize is a new sword!

A little farther along the path, and Wol asks about the Prophecy. How detailed is it? "Funny," says Echo, "there a lot of things -- like Garland -- that aren't in the Prophecy at all." A bit of reminiscence of Garland's warning not to trust anyone, and Wol comments he's getting to understand Garland's point of view. He also wonders if Meia might be around, which sparks a bit of jealousy from Echo. Wol fails to see much difference between Meia and Echo when it comes to using him. Even Princess Sarah seems to play the perfect part of the damsel in distress... with no cracks to reveal anything beneath the façade.

Enough with Mister Gloomypants, cries Echo! We're here to have fun! And fun will be had with the Chocobos! They want to have a good time as well, and that means fighting. Wol obliges them, and the Chocobos have a grand time of it. After a final showdown, they offer Wol a spectacular ride, but he turns them down.

The festivities are nice, but Wol is curious about when it all started. As expected, nobody remembers. The point of the festival is to wash away the past, and people have done a great job washing it all away, even if that dooms them to repeat their actions over and over. That's why the Warrior of Light is so important, Echo says -- to give people hope that these cycles can be broken.

And the next step on that is praying at the Runic Temple. Wol doesn't see the point, since a warrior gets what he has by his strength, not by asking others for permission. Besides, it turns out the road to the Temple is filled with Abyssans and other fiends. Our hero doesn't see much choice in the matter, though Echo reminds him that he always has the option to stop...

The Abyssans don't provide much challenge. Neither does a final appearance at the Temple by Gilgamesh.

Inside the Temple, Moggy finally shows up, still decked out in finery from the Light of the Skies event. He reminds Wol that the Moogles have a special bond with him, which makes Wol remember the death of Mog in one of the previous Runic Temples. Moggy's also brought a friend up to the Temple: Princess Sarah. She can't sleep... which is a problem, since the night of the Festival apparently won't end until everyone is asleep, including Wol. He's not really sleepy either, and offers to take a walk with Sarah.

There are 71 areas in total, including 10 locked routes and 39 treasure chests.

The fiends found around the region will scale to match the difficulty of the player, so exact enemies in each area will vary widely. Enemies will also occasionally be replaced by Cactuars or Metal Cactuars, whose cards can be used for upgrading your abilities.

Completing the Runic Temple causes all of the bosses to regenerate around the map. The player must also defeat Gilgamesh 5 more times to gain access to the last area. Similar to the Battle Towers, Gilgamesh is progressively stronger in the course of his 10 battles.

Many of the cutscenes in this region include replays of scenes from previous adventures / regions. These include:

Note that although the Chocobos make a strong appearance, they do not drop Chocobo Cards -- only Feathers and Tomes.