The Gigaflan is a boss-sized fiend in Mobius Final Fantasy, appearing as part of the Final Fantasy X Collaboration Event. It's extra-large, it has a fairly high Break Gauge, and it absorbs

Like its regular version the Black Flan, it casts Painga and Painja spells at you. It also casts Felflame at you as a pre-emptive attack if you have any ailments on you, so be careful when killing other Flans leading up to the Gigaflan's appearance. 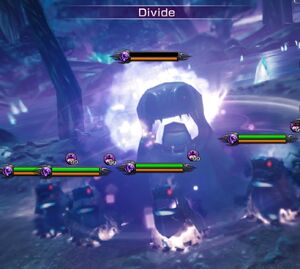 When the Gigaflan is killed, it casts Divide, separating itself into 6-8 small-sized Black Flans, to continue the fight.

The Gigaflan gets 3 actions per turn.