You may be looking instead for: Gilgamesh (Job), the Ultimate Hero "skin"; Gilgamesh X, the Supreme Card; or one of the many Gilgamesh Ultimeh Cards.

Gilgamesh is one of the Boss fiends in Mobius Final Fantasy. He is a recurring event character.

Gilgamesh is a non-elemental fiend, so elemental abilities do no extra damage on that mark. However, most of his attacks do have elemental affinities. In addition, Gilgamesh frequently invokes

Break Immunity for one turn, when he:

At higher difficulties, Gilgamesh also powers up at lower health levels with Morphing Time, similar to the Sicariuses once their Guardians are dead.

Gilgamesh also shows up in Pleiades Lagoon as

Gilgamesh Prime. Except for the light affinity, there is no difference from Gilgamesh as he normally shows up.

Gilgamesh's Gala had these added actions:

At high levels (Gala level 42 and above) he also gains

Perfect Defense on reaching 1 HP, and throws a final Ultimeh - Spare Change? before falling. In the Phantasmic Coil, he will preemptively cast "Morphing Time".

Regions Gilgamesh Can Be Encountered[] 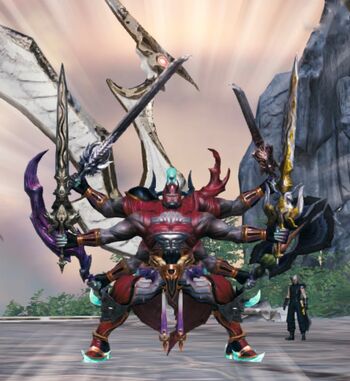 Gilgamesh is a champion swordsman, wandering the multiverse in search of the greatest weapons to be found. He has high spirit... and a high ego to match. He tries to portray himself as an epic dramatic character, but usually ends up looking rather comedic instead.

The six swords Gilgamesh carries are:

He initially shows up at the Tower of Trials during his usual search, but his encounter with Wol leaves him very concerned. In every world the swordsman has visited, he has found the Warrior of Light to be filled with justice, or passion, or something else that drives them to right the wrongs they see. But he sees none of that in Wol. This will NOT do. For the sake of The Way Things Ought To Be, Gilgamesh will work to "fire up his heart..." through intense training! And what better way than offering Gilgamesh's Challenge! By the end of the challenge, Gilgamesh is pleased, but it's just a start. He vows to keep the challenge going until Wol becomes an epic hero.

He reappeared as part of the procession of characters celebrating the First Anniversary, Part 1, where he offered a (small) challenge, then handed over one of his weapons: Muramasa.

In time, Gilgamesh returned to the Tower of Trials for Gilgamesh's Gala, along with a few friends that he picked up along the way: Ultros and Typhon. He added a few new tricks -- particularly the ever-popular "Spare Change?" attack where he throws

Magicite at you -- but still has the the same jovial if bumbling manner.

He continues to pop in and out of Palamecia, sometimes just checking in on his friend, sometimes bringing him a new rival... and sometimes just to enjoy a party! As a "reward" for completing Act 1 and vanquishing Chaos, Gilgamesh even invites Wol to his home, the Rift.

After Gilgamesh gets in on the Underground Coliseum Tournament, he admits that he's spent so much time around Palamecia that he starting to consider it home... an interesting change for the Wandering Vagabond.

His dialogue in Gilgamesh's Challenge suggests that he has met the Warriors of Light from Final Fantasy I through XV, and he gives a quick summary of each one. He also seems aware of his status as a storyteller, and wants to make sure that Wol lives up to what's expected from a Final Fantasy game hero.

Wol's visit to the Rift allows him to see Gilgamesh "summoned" to another game world, apparently confirming that Gilgamesh is still active in his cross-game tripping... and suggesting that he's not entirely in control of the process.