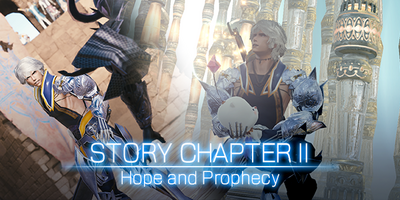 Hope and Prophecy is the second Region that the Warrior of Light visits during the storyline of Mobius Final Fantasy. It takes place in the The Ishtar Desert. It can be accessed from the World Map following the completion of Castle Cornelia in Chapter 1: Blank Slate.

A Hard Mode version of Chapter II: Hope and Prophecy was available from May 23, 2017 to Dec 17, 2018. The story and events remained the same; however, the enemies and battles were strengthened for added challenge. Additionally,

Crystal Gigantuars had a chance of appearing in battle as rare fiends.

For information about the plot or storyline of Chapter 2, see: Story 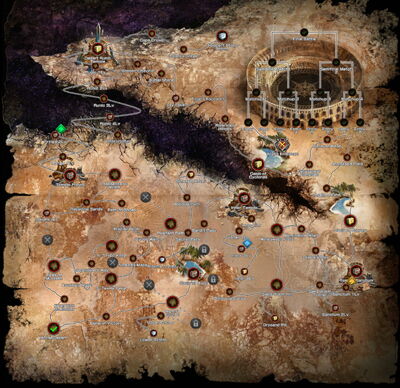 This desert region has many branching paths and no clear direction, including paths that are never unlocked, forcing you to go around them. The four temples are roughly based on the four starting elements, and you will find fiends concentrated around those elements in those areas.

In the later part of the region and story, you will step into your first Arena. In this location, the rules are a bit different: instead of paying a Stamina cost for each area, you will pay an overall "entry fee". All arena battles up to the top from here cost 0 stamina. You will always start at the bottom as Entry 1, and work your way through the tree in a single-elimination run-off. Finish to the top (Final Battle) and the entire arena resets for the next contest. Run the arena as many times as you like!

The region has 68 Locations, including the 15 in the Arena, only 4 of which you actually touch. (The other 11 are marked as complete when you win the contest). There are 18 Treasure chests.

The region sports 12 Normal Fiends, 4 Sub-Boss Fiends, 3 Wandering Bosses, and 4 Bosses only found in the Arena.

These areas can only be accessed following the completion of Teleport Stone Shrine.