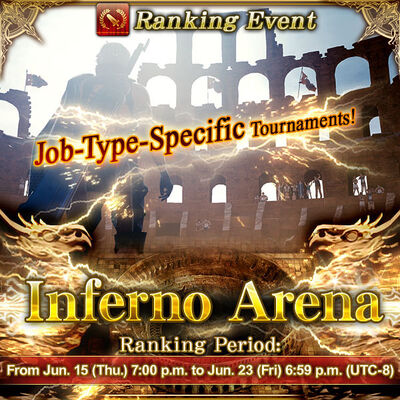 Inferno Arena is an event in Mobius Final Fantasy, offering a progression challenge and an exploration region.

For the first week this area offered a progressive battle (Infinite Arena) competition, with prizes for players with top ranking. After the ranked competition ends, the area stayed open for three more weeks, offering players the opportunity to gather Cards for many of their existing Abilities.

Wol is given an introduction to the arena from the Battlemaster, who explains that this arena is populated by champions from years -- millennia -- past. They have devolved into Shadows, and they await WoL's competition. WoL also learns about the Triad, three ancient gods of battle: the Goddess, the Valiant, and the Trickster. They sleep, but every contest in the Arena brings them a little closer to waking and unleashing new havoc on Palamecia. Echo is horrified, but Wol agrees to participate when it's clear that the Shadows would be attacking folks in the greater world if the Arena didn't sate their desires for victory.

As Wol gets closer to ultimate victory, he asks the Battlemaster if anyone has tried to clear the place without combat. The Battlemaster tells him of a previous Warrior of Light, Vargas, who tried to end the evil with prayer. It did not go well. Echo worries that the same might happen to Wol if he continues, but Wol seems unconcerned.

With victory over the four Job Classes achieved, it only remains to find Vargas for the Final Battle. To Echo's surprise (but not Wol's), Vargas turns out to be the Battlemaster! A hard fight ensues against a powerful opponent, but Wol lays Vargas low. As the Shadow purges from Vargas, three motes of Darkness surround Wol, appealing to him to partake in the glory of the fight. Wol shakes them off and they disappear. When asked about it, our hero states that it was lessons learned from Echo that saved him: the sweetest words of persuasion come from those who seek to doom you.

For the final prize, Echo has Wol close his eyes. Upon opening them, Wol is greeted by the person he chose (and it's Garland if Wol chose "anyone"!) ...but it's just an illusion cast by Echo, who hoped to swipe the final treasure while Wol's eyes were closed.

Your first battle is a token "entrance exam", after which you're asked to choose one of four people to give you your final prize: Echo, Meia, Sarah, or Anyone.

Once this is done, you can start the Arena battles. It takes three skirmishes in one battle to win a Tournament and collect Trophies for each Job type. Gladiator's Trophies are used to unlock the areas in the Exploration section, whilst Job trophies are used as the Ranking score. Once you have collected ten trophies from each Job type (40 in total), the Final Reward becomes available, from the prize giver you chose at the beginning.

After the Ranking Event concluded, players could continue collecting Gladiator's Trophies to unlock the Exploration areas, allowing the player to continue defeating enemies and gathering Cards to sell or upgrade the player's Abilities. The Arena also continued to offer Job trophies, but only as a personal tally of victories. Every victory in the Arena after the 10th in each Job also gained the player 2x Ability Tickets.

The map is broken up into three different areas -- the Tournament Arena, an Exploration area, and the Prize area. Players start in the Arena, and unlock the other areas with Trophies earned by winning the Tournament repeatedly. 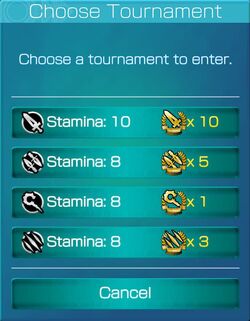 The Arena doesn't work on locations as such. Entry starts at "Entry 1", where you choose which Job Class you wish to fight. (You must have the same job equipped, in both main and sub jobs.) Each battle has 3 skirmishes to complete the tournament -- First Battle, Semi-Finals, and Finals -- but these are all kept within one battle set.

The initial list of rewards on the website were incorrect, and were revised on June 19. The admins gave a gift of

Elixir x5 to every player as compensation.