Light of the Skies 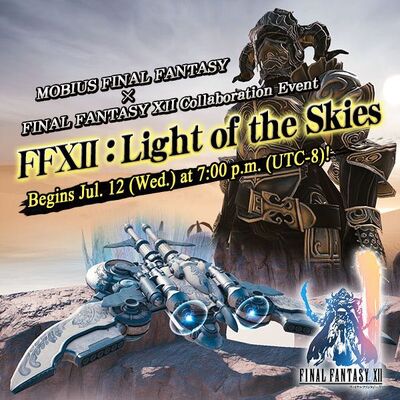 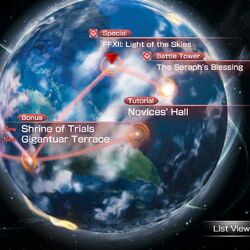 Go to the Light of the Skies region spot on the World Map -- part of the red "specials" section. (You must have completed Chapter 1 to see this.)

Wol and Echo show up in a desolate area, having answered a summons from Moggy. He welcomes the pair to the Purvama Strahl: a set of floating islands, and introduces his friends, the Mandragoras. Apparently Moggy has set up a deal where Wol will pose as a "sky pirate" and hunt down the Mandragoras for sport. If Wol can catch them, they'll turn over enough loot to fill Wol's pockets.

Moggy confesses that the Mandragoras have been training and guarding against the sky pirates for centuries, but there haven't been any pirates in a very long time... so he's crafted Wol into the role, and the animated vegetables are excited to finally have someone to fight. Wol accepts the role, since the ancient treasure here should be valuable, and with the completion of the opening Mark Wol gets a Skystone, which allows him access to an Airship... and now he's a real sky pirate!

First up is the Mandragora Prince, who has specially bred his own bosses to be nastier than usual. Wol makes short work of them -- and the Prince -- after which the defeated vegetable gets up and walks away. Moggy explains that their intent is only to challenge the Legendary Sky Pirate. Whether they win or lose doesn't matter. Wol lets him go.

Second up is the Pumpkin King. He takes a different tack, by hiding amongst a field of Earth bosses. Wol hunts him down, hiding at the back of the field, and pummels him into unconsciousness. Much like his predecessor, the Pumpkin King wakes up and walks away, satisfied. Wol wonders what would happen if he proved not to be sky pirate. Hearing this, the King swivels about and promises great vengeance... and that Wol would be judged. Wol is largely unconcerned until a black-armored figure appears and disappears a few times.

Topstalk's plan is simple: run. Wol gives chase across the fiery field, and easily catches him. Topstalk leaves without a word, but the mysterious Judge appears again. Wol tries to taunt him into a response, but this foe also remains silent before vanishing. Our hero speculates he might just be a ghost. 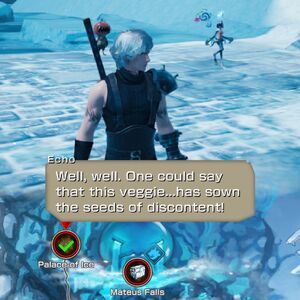 The Alraune King seems to have a different attitude: he's happy to be challenged by such a great (and humble!) sky pirate. But it's a trap! He offers only a 1-Gil reward, hoping to demoralize Wol, and throws various weakening traps at him. In the end they don't help, though, and the Alraune King is bagged. Wol threatens the King with direct harm, hoping to draw out the Judge Magister, but the vegetable doesn't believe a true sky pirate would do such a thing... and he's right. Wol can't do it. Still, says Moggy, it proves the Judge is working with the Mandragoras. Wol is supsicious that Moggy might also be working with the Judge, but the Moogle insists he's not.

Reaching the port after the Alraune King, Wol is met by... the Judge Magister! and he's ready to fight! But with his defeat, Wol realises there's no weight to the Judge's blows. Perhaps the Judge really is a ghost...

The Onion Queen gives Wol a straight, stand-up fight - no trickery. Wol takes her down, and she dashes off. With excitement, Moggy expresses his anticipation for the coming titanic battle, where our Sky Pirate hero will face all five of the vegetables united once again. The Mandragoras gather with a final surprise: the Judge Magister stands side by side with them.

It's a hard battle, but Wol emerges victorious. In a final stroke of victory, Wol slices the helmet right off of the Judge, revealing... nothing. The suit is empty... except it fidgets a bit, and Moggy emerges from it. He explains that he found the Judge's armor in the Mandragoras' base, but was forced to take shelter in it to avoid being discovered. He was horrified to find that the vegetables were casting animating spells on the armor while he was still in it! Thankfully, Wol has stopped that for the moment, and freed him from his imprisonment, but not before Moggy managed to score a healthy amount of loot from there.

Both Moggy and Wol felt an aura of righteousness coming from the armor, so it may be that armor absorbed that from the actual Judge -- wherever he is -- and the Mandragoras amplified that to make it move. As a parting feeling, Wol looks at the Mandragoras' ancient airship and wonders if could be made to fly again. 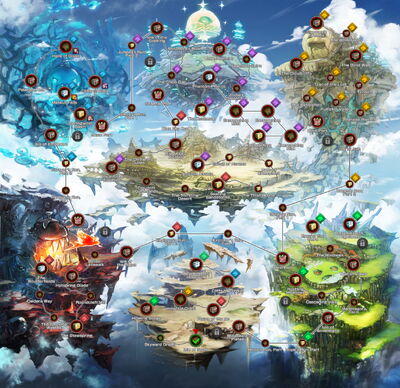 The region is broken up into seven islands -- the intial entry island, one for each of the five Mandragoras, and the central conflict island. Moving from island to island requires unlocking routes by defeating the Mandragoras. Once the main line is completed, the player can continue on four infinitely looping levels, where the Judge Magister gets progressively more difficult.

There are 78 areas in total, including 7 locked routes, 51 treasure chests, and 4 "Encroaching Mist" loop areas. Because of this loop, the player can't technically complete all 78 areas.

Similar to previous Collaboration Events, the fiends found around the region will scale to match the difficulty of the player, so exact enemies in each area will vary widely.

Once the player completes the Ancient Airship, the final four "Encroaching Mist" areas are available. This is an infinite loop with an increasingly more powerful Judge Magister at the end. Every area here earns a Judge Magister Mark as a tally of victories. Every fourth area (one complete loop) earns 3 Ability Tickets.

Also upon completion, the Mandragoras reappear as reoccurring bosses on their respective penultimate areas, with those areas reset to a cost of 7 stamina, with 4 battles.

Combat around the region scales along with the player's level, so different fiends will show depending on how strong your character is.

These were added as card drops at the Ports around the map:

Music on the map is from Final Fantasy XII: The Zodiac Age.