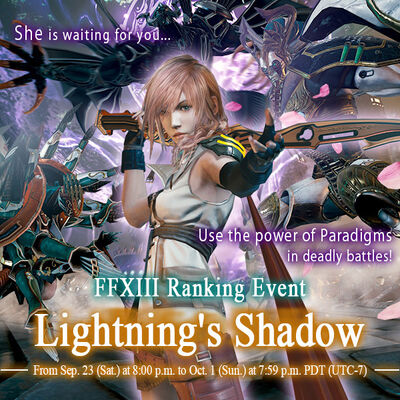 Wol is wandering along one of the tracks in the Hanging Edge when Lightning approaches... as a foe! She spouts some typical lines, but has none of the focus that Wol has come to expect -- it's a shadow. It's unclear what's going on, but answers will only be found on the other end of battle.

The first appearance made use of the paradigm play system from Lightning Resurrection, Part 1 and Part 2, and assumed players had completed the full progression of advancement in the Crystarium I and II. The lower levels could be defeated without paradigms, but higher levels practically required their use.

The second appearance did away with paradigms, leaving a fairly standard Ranked Battle Tower, with the exception of Lightning's own use of them. Difficulty was dropped for the more powerful enemies... but not by much, since expert players were expected to have greatly built up their Card Sets by this point.

The ladder is composed of 13 steps up, with each step progressively harder than the last. The player cannot return to these areas once they are completed. Each level features some FFXIII enemies, with later Sites adding a heavy-hitting Sicarius to the mix.

Lightning's Shadow is the last foe for every area.

After completing the ladder, the player enters the "Phantasmic Coil" areas. This is a set of 4 areas that repeat in an infinite loop, also with an increasing difficulty with each area finished. A Prize is handed out for each loop of 4 completed.

There are 18 total areas and 14 treasure chests. Since the last treasure chest (in the Phantasmic Coil) automatically regenerates, the last chest can technically never be completed.