Mako Reactor ∞ is the last of the dungeon regions for the Eclipse Contact event -- part of the Final Fantasy VII Collaboration Event. Players gain access here after finishing Mako Reactor 3: Lower Levels, and face off in the end against the Guard Scorpion Mk.III. 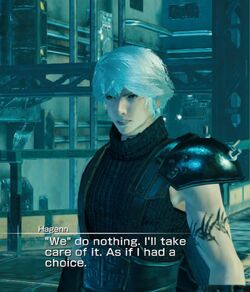 Wol walks up to the fourth Mako Reactor. Cloud has left, but the reactors are still here. So much for the hope that they'd just disappear. It looks like it's up to Wol to get rid of the rest, and he's ready to get to it. Echo is a bit surprised that he'd leap to the hero job so quickly, but not nearly as surprised to learn he's actually after loot! There may be more of those Crystals that took Cloud away, and he'd like to find them. While Echo is pleased, she points out that the Warrior of Light is supposed to be more noble than that. Wol doesn't really care - he fights because he must, and any further motivations are his own.

Wol wonders if Cloud actually made it home, and Echo responds that nobody who comes to Palamecia can ever go back where they came from... and then hints that the people here aren't the originals anyway. Cloud grabs onto that immdiately! Echo admits that he's a mirror image, given form in Palamecia, but Cloud won't be able to transcend that while he still thinks he's the original -- which is bad for his long-term existence. With luck, she says, Cloud will let go of his memories and be free to become what he's truly meant to be... and only then can he find his way home.

So where does that leave Blanks like Wol? More free than that, apparently. They have no past to tie them down, so they're practically unlimited. Somewhere Echo can't follow? Yes, she says... but she won't give any details about that.

What, then, was the story with Cloud? Echo seemed to expect the two of them to end up as enemies, but instead they became the best of friends... even possibly brothers. Echo admits people like that typically end up being bad guys, and she's happy to be wrong here. 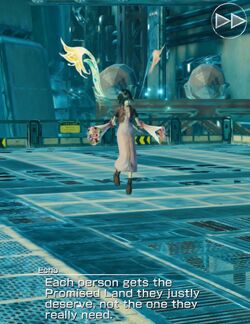 The region does indeed have some crystal fragments, but they don't seem to do anything. Wol gathers them up, and they at least let him get farther into the complex, but don't otherwise seem to react. Even at the end, nothing similar to Cloud's crystal can be found. Wol is disappointed, since he was hoping that he might be able to find a way to his own Promised Land, away from Palamecia. Echo is hurt that Wol would so readily leave her behind, but Wol says he isn't prepared to leave immediately. He simply wanted the option. He's willing to take her with him, but she points out she's a part of Palamecia, and can't leave it.

Be careful with thoughts of a Promised Land, Echo responds. People don't get the Land they want -- they get the one they deserve. Bad people get bad places. People who expect nothing get nothing. And the journey there forces you to look deep within to find out who you really are. Cloud, for example, is facing his own past, and it's not easy.

Wol gets the fourth reactor shut down, but the results are pretty quiet... and there are still four more reactors to go. Who knows what challenge they might offer?

The story ends here, but the final 4 Reactors continue back in Midgar. 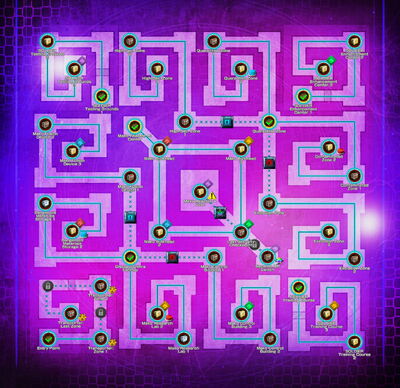 The region starts at a "central" line of teleporters. As you work your way through the map, you collect

Mako Fragments that open the next section of the map, from Zone 1 to Zone 2 to the Core.

There are also three optional zones that open up near the end, containing more powerful enemies. These give the

The Core zone includes a Red Alert, which causes extra sub-bosses to appear at the Core areas. Once the Red Alert is cancelled, these revert to having their regular bosses as the last skirmish.

There are 42 areas in total on this map, including 35 treasure chests, 8 locked routes and 6 teleport destinations. Difficulty will scale depending on how strong you are, so enemies will vary from player to player.

Many of the areas here feature a single Security Squad or similar enemy type. These are great spots to collect cards for levelling up abilities.

The Guard Scorpions stay available at each corner of the map, before and after the region is cleared.