Mako Reactor 1 is the first of the dungeon regions for the Eclipse Contact event -- part of the Final Fantasy VII Collaboration Event. Players gain access here through Midgar, and face off in the end against the Guard Scorpion Mk.I. 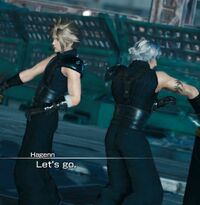 Wol steps foot in a strange place: all metal, with hordes of security guards.... and they do not like his presence. Wol braces for battle, as a voice from nearby states "None shall remember the names of those who do not fight." In walks a spiky-haired stranger with a massive sword, and the guards immediately treat him as the greater threat. But with two warriors there, the guards are quickly wiped out. The stranger states this is a dangerous place, and tells Wol to leave before he walks away.

Wol follows him, full of questions. The stranger calls himself Cloud Strife, and this place is a Mako Reactor run by the Shinra Corporation. It's the power company! But Mako, he explains, is the life force of the planet, and it's being sucked dry. Not a good thing for Palamecia! No real choice, then -- this place has to be destroyed. Cloud doesn't seem willing to team up, but won't hinder Wol, either.

Cloud tells Wol to find the switches that unlock their path, but by the time Wol activates them and returns to Cloud's location, Cloud has moved on. Echo demands that Wol follow him, and Wol quickly realises why. Cloud can see and hear Echo, and he seems to have his memories intact. He's not a blank, so he must be a Heretic. But there's more going on. Cloud also brought this place with him to Palamecia. This whole thing may be test for the Warrior of Light... and Wol may end up fighting him in the end.

Wol and Cloud conclude they are here for the same task -- shut down the reactor. Wol covers the site, clearing enemies and opening locks, while Cloud waits for the Reactor Core to open. Once the work is done, the two converge on the Core, but there's one last obstacle: a Scorpion Tank. Cloud rushes it, but finds he can't even scratch it. That's Palamecia for you... it's Wol's problem. Wol makes short work of it.

The reactor shuts down. All good, but Cloud notes there are more reactors. The two agree to work together to shut down the rest.

To be continued in Mako Reactor 2: Upper Levels 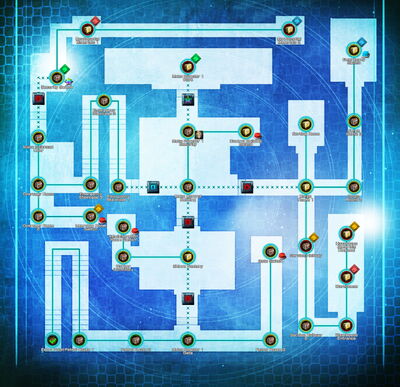 There are 33 areas in total on this map. Every level has a treasure chest except for the first one.