Mako Reactor 2: Lower Levels is the third of the dungeon regions for the Eclipse Contact event -- part of the Final Fantasy VII Collaboration Event. Players gain access here after finishing Mako Reactor 2: Upper Levels, and face off in the end against the Guard Scorpion Mk.I. 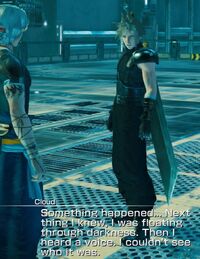 The sweep of Reactor 2 continues. Wol wonders about the Security Guards in the facility. They're acting completely on instinct, with no tactics. What makes them human was lost long ago, Cloud says. But he can't deny he has some similarity with the Guards. He might not be the real thing...

But the reveries are halted by a blaring alarm. Killing all of these guards seems to have finally caught someone's attention. It's a terrible racket, and it doesn't take long for Wol to find the shutoff switch and get some silence again. Too bad it just won't stay that way. It takes multiple switches -- and a lot of hacking and slashing -- to reach the central core.

As expected, there's a Guard Scorpion there. And again, Cloud can't harm it. Wol says "I got this" and attacks while Cloud relaxes, much to Echo's amusement. The Scorpion is a pile of scrap metal soon after.

With the second reactor shut down, Cloud remembers a job with paying clients... and a train... at night? Then there was a voice talking about a prophecy and Laws. Cloud responded he wasn't interested, and the voice hasn't spoken since. Not much help, really. No matter, there are more reactors to shut down, which may shed better light on things.

To be continued in Mako Reactor 3: Upper Levels 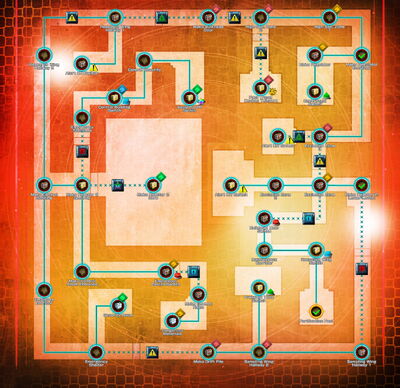 Many of the paths on this map are locked, and require specific switches to be thrown to gain access. There are also occasional activations of Red Alert, which causes extra sub-bosses to appear at many of the areas you visit, and for extra locks to appear on routes. Red Alert is cancelled at particular marked areas, similar to the colored switches.

There is one teleport space marked to help you travel from one section of the region to another. Except for the one use, this area is largely superfluous -- you can teleport to any area you've already visited.

There are 38 areas in total on this map, including 27 treasure chests, 12 locked routes, and 1 "Teleport" site. Difficulty will scale depending on how strong you are, so enemies will vary from player to player.

Once the region is cleared, the Guard Scorpion Mk.I will wander around the map.