Mako Reactor 2: Upper Levels is the second of the dungeon regions for the Eclipse Contact event -- part of the Final Fantasy VII Collaboration Event. Players gain access here after finishing Mako Reactor 1, and face off in the end against the Guard Scorpion Mk.I.

Wol and Cloud meet up at the second reactor. Wol wonders if he's proven himself yet, but Cloud isn't ready to trust someone he's just met. The two work together as before: Wol mops up the fiends while Cloud flips the switches. Cloud keeps Wol in sight, if only because Wol is useful. Not the nicest way to put it, but nice in an indifferent sort of way.

How long would it actually take for these reactors to kill the planet? Maybe decades, Cloud says, if the monsters driven by Mako energy don't kill them all before that.

Cloud also seems to be distracted by something. Eventually he asks if Wol knows a way back to where he came from. But Wol has no idea. Being a Blank, Wol has no memory of where home is. Cloud, however, has bits and pieces of it... and more comes back with each reactor that gets shut down. Sounds like he has his own reason to fight now... so on we go!

To be continued in Mako Reactor 2: Lower Levels 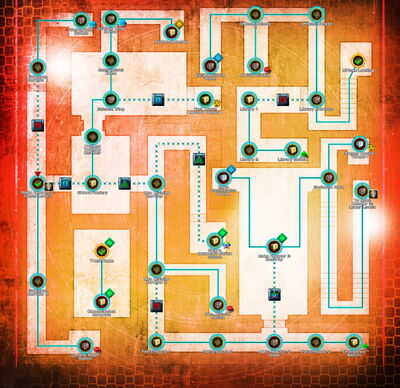 There are teleport spaces marked to help you travel from one section of the region to another. Except for the initial journey, these are largely superfluous -- you can teleport to any area you've already defeated.

There are 37 areas in total on this map, including 23 treasure chests, 7 locked routes, and 2 "Teleport" sites. Difficulty will scale depending on how strong you are, so enemies will vary from player to player.