Mako Reactor 3: Lower Levels is the sixth of the dungeon regions for the Eclipse Contact event -- part of the Final Fantasy VII Collaboration Event. Players gain access here after finishing Mako Reactor 3: Middle Levels, and face off in the end against the Guard Scorpion Mk.II.

The final reactor is here. Wol re-checks if Cloud is okay with his presence, and Cloud thanks him for his help... and into the fray they go.

The opposition is strong, but short. They're very near the end. Wol wonders what will happen to the Reactors after they're shut down, since they just appeared here. Maybe they just disappear... or maybe they stay, to rust away in time. No matter, they'll find out soon enough.

As expected, there's a Guard Scorpion at the end. The two swordsmen banter for a small bit like old friends, then Wol tears the Scorpion to scrap. With a wisp, the third reactor shuts down. 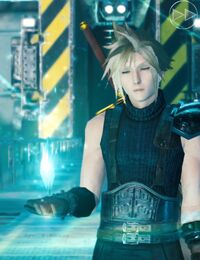 Then the unexpected happens. A glow coalesces into a crystal that Wol can't touch. It's for Cloud. Echo explains it's the light of a different world. It feels warm, and gives Cloud a sense of peace. Echo remarks that allowing it will take him to that world -- both of them, actually -- but it's not the world he left, and they can't come back if they go. Cloud is still not certain if he's the original or a copy, but he's at peace with that. If this goes to a new place, he wants to see it.

Wol steps away. Cloud asks if Wol is willing to join him, and Wol responds that it's appealing, but he hasn't seen the worst this planet has to offer. Until then, Wol will stay.

Cloud concentrates and disappears, off to whatever the universe has in store for him. Wol is left to walk away, back to the struggles of Palamecia.

To be continued in Mako Reactor ∞ 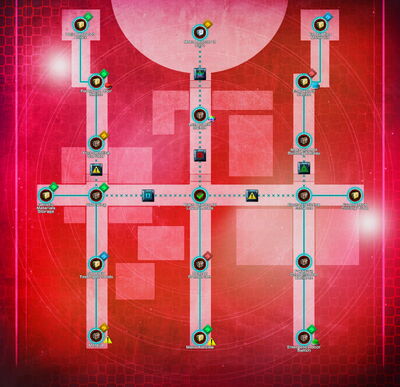 Many of the paths on this map are locked, and require specific switches to be thrown to gain access. There are also occasional activations of Red Alert, which causes extra sub-bosses to appear at many of the areas you visit, and for some routes to lock down while Red Alert is active. Red Alert can be cancelled at particular marked areas, similar to the colored switches.

There are 19 areas in total on this map, including 18 treasure chests and 6 locked routes. Difficulty will scale depending on how strong you are, so enemies will vary from player to player.

After the region is cleared, the Guard Scorpion Mk.II shows up as a repeatable fight on the Evaporative Cooling Tube and the Genetic Materials Storage areas.