Mako Reactor 3: Upper Levels is the fourth of the dungeon regions for the Eclipse Contact event -- part of the Final Fantasy VII Collaboration Event. Players gain access here after finishing Mako Reactor 2: Lower Levels, and face off in the end against the Guard Scorpion Mk.II.

Wol is pondering Cloud's situation. What would have happened if Wol had dismissed Vox when he first arrived on Palamecia. Would he have been branded a heretic, left with bits of memories from his old world... like Garland? Not likely, says Echo -- Garland is cursed with memories from this world.

Wol also asks about SOLDIER. Would he have qualified? Clouds says he might have made 3rd Class: the lowest one. It sounds bad, but he explains even they are a select few, and MUCH stronger than the typical human... all courtesy of Mako, of course.

Cloud has questions of his own. What is Palamecia like? Still a beautiful place, Wol comments. So very unlike Midgar. ...and that Echo creature. Did Wol ask for that? Alas, no, Wol admits, she's just a necessary part of the whole Warrior of Light thing.

Cloud changes things a bit on this round: He'll keep the Security Guards distracted while Wol hits the switches. It's not that different from previous levels, though -- Wol still has to mow through a bunch of fiends to reach the switches.

With all of this level's switches thrown, Cloud is more concerned. His memories are slowly returning, but they're so very scattered and disconnected. The more he reflects, the more he's concerned that these memories aren't his -- that he's a fake. Wol and Echo both point out that memories are a fickle thing, but he won't be consoled.

To be continued in Mako Reactor 3: Middle Levels 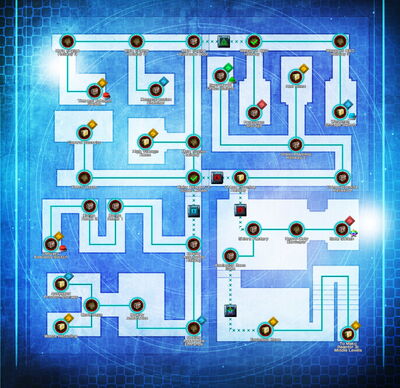 There are 38 areas in total on this map, including 34 treasure chests and 24 locked routes. Difficulty will scale depending on how strong you are, so enemies will vary from player to player.