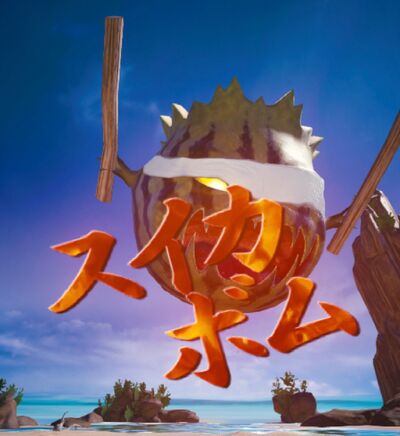 You may be looking for the single-player Melon Bomb, from the Summer Resort: Melon Mashing event.

The Melon Bomb is the Sicarius adversary for the Melon Bomb Invades multiplayer event. It appeared during the Summer Resort event series in July/August 2018, and offered multiplayer battles with a number of decent rewards. The Bomb starts with a

Fire affinity (encouraging Water abilities to kill it), but the affinity shifts each week to a different element.

Appearing on these dates:

During the timeframe, players can take on the single Melon Bomb at ★3 to ★5 difficulties. These Bombs are big and they're tough, but they go out of their way to be harmless.

Yukata Melon Bomb is a ★3 difficulty quest available during the Summer Resort event series in July 2018, in the Ring of Braves. Battling the Melon Bomb costs 30 Multiplayer Stamina, with a

skillseed multiplier of 4. Players have 30 minutes to defeat it.

Endless Summer Melon Bomb is a ★4 difficulty quest available during the Summer Resort event series in July 2018, in the Ring of Braves. Battling the Melon Bomb costs 50 Multiplayer Stamina, with a

skillseed multiplier of 5. Players have 40 minutes to defeat it.

Hot Hot Melon Bomb is a ★5 difficulty quest available during the Summer Resort event series in July 2018, in the Ring of Braves. Battling the Melon Bomb costs 60 Multiplayer Stamina, with a

skillseed multiplier of 5. Players have 40 minutes to defeat it.

The Melon Bomb starts battle with Immunity to ALL ailments. In compensation, all players get:

The Bomb erects a

Rind Barrier at the start of each turn, worth 8 points. While this Barrier is up, the Bomb's HP Defense and Break Defense are greatly increased. Each attack or ability cast upon the Bomb will remove one Rind Barrier. (multi-strike attacks only take out one... sorry!) Major damage can't be inflicted until all of the Rind Barriers are removed. 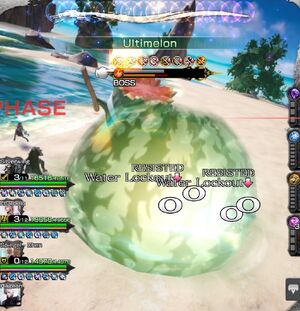 The Bomb starts with a

Seed Counter of 88, which it will use in its attacks. Each of its typical attacks, like Seed Toss and Seed Machine Gun will throw seeds at the player, increasing their

Melon Seed. Attacking the Bomb, especially while its Rind Barrier is up, will reduce the Seed count on both the player and the Bomb, although the Bomb will refill its counter with its Reseed action.

The Melon Bomb's various attacks, including Seed Toss and Melonra, either change some of your orbs from the prime element (the Melon's weakness) to a non-prime color, or remove a few of them entirely. When the Melon is has successfully spit 88 seeds at the players, it will cast its heaviest spell -- Ultimelon -- which will throw various annoyances including a total loss of Orbs, loss of Actions, and Element Lockouts; all based on the number of

Melon Seeds the players have at that moment.

The Summer Memories cards from the Summer Resort cardset will boost the players' stats with almost all of the major boons! These will be applied with 1 turn for each such Card in the party, with a bonus turn if all four players have at least one card. So if three players have one card and one player has two cards, the boons will get 6 turns. (1+1+1+2, +1)

Each player with at least one card will also provide some starting amount for the Ultimate Gauge. If all four players have such cards equipped, then the Ultimate Gauge is filled for all players at the start of battle! (This is great for opening Ultimate Attacks that completely Break the Bomb, like Lightning and Prima Donna.)

In addition, each card will reduce the power of the Bomb in some manner:

When the Bomb's HP bar drops below 33%, it turns gray. Attacks will continue to reduce the Bomb's HP, but the gray bar will not show it. This is so the players do not know how much health the Bomb has left before it dies! Players will need to make their best guess on whether they need minimal or maximal force on any particular turn.

The players get 10 turns to kill the Bomb before it explodes. If the party succeeds, then they will be rewarded a Melon Slice matching the current Bomb's element:

Wind Melon, etc. If the Bomb does explode, all players are killed and they will only earn

The player who makes the killing blow will get bonus Melon Slices, based on the number of players in the fight. A full party of 4 players will grant the highest amount: 4 Slices for ★3, 6 Slices for ★4, 8 Slices for ★5. These are all doubled if you're the host, or you used Stamina for the fight!