Midgar is the central region for the Eclipse Contact event -- part of the Final Fantasy VII Collaboration Event. It is used to begin the story, provide intermediate challenges as each Mako Reactor region is completed, and to provide a high challenge space for advanced players. 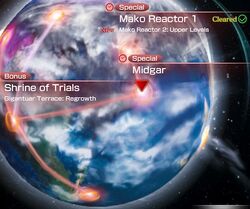 Wol steps foot in a strange place: all metal, with hordes of security guards.... and they do not like his presence. Wol braces for battle, as a voice from nearby states "None shall remember the names of those who do not fight." In walks a spiky-haired stranger with a massive sword, and the guards immediately treat him as the greater threat. But with two warriors there, the guards are quickly wiped out. The stranger states this is a dangerous place, and tells Wol to leave before he walks away.

Wol follows him, full of questions. The stranger calls himself Cloud Strife, and this place is a Mako Reactor run by the Shinra Corporation. It's the power company! But Mako, he explains, is the life force of the planet. Shinra is sucking the life out of the planet. Not a good thing for Palamecia! No real choice, then -- this place has to be destroyed. Cloud doesn't seem willing to team up, but won't hinder Wol, either. 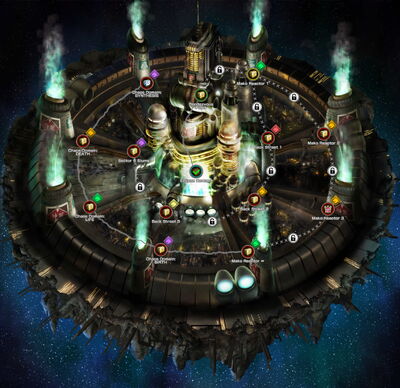 As the player completes the associated Mako Reactor levels, each will appear on the Midgar map. Each Reactor level will also have a certain number of

Pale Lights, which are required to unlock the Back Street areas.

There are 14 areas in total on this map, including the main Reactor route, the Back Street Route, and the high-end challenge route. Every level has a treasure chest except for the first one.

As each of the eight reactors get shut down, the plumes of light emitting from them on the region map are also extinguished.

After completing the Mako Reactors, all areas reset to include their original bosses. (You only get rewards for the first time, though. Sorry!)