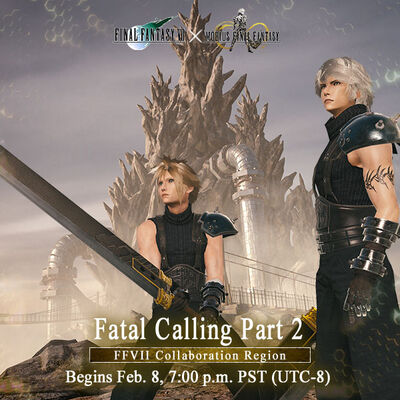 Nibelheim is the third Region of Fatal Calling -- one of the Final Fantasy VII Collaboration Events. The story features many of the characters from Final Fantasy VII, as Wol and Cloud track down Sephiroth. 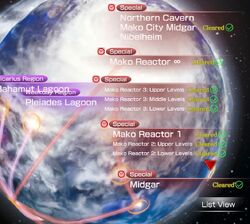 Go to the Nibelheim region spot on the World Map -- part of the red "specials" section.
You must have completed Chapter 1: Blank Slate and Mako City Midgar to get there.
It is not necessary to have played through Eclipse Contact, but it will give some background for this story.

This region makes use of the Materia System, offering extra commands during battle, and dropping Materia spheres from defeated enemies and treasure chests. See the Materia section of Fatal Calling for more details.

Each Jenova Pod you find will allow the Huge Mako Mako Gauge on the right of the region map to expand upward by 1-3 sections. You can then fill those sections with

Mako Energy that you pick up from the enemies in the area. There are frequent locks that require a minimum Energy Percent to pass, but normal playthrough should gather enough without needing to back-track. While these Mako Gauge sections and the locks between them are treated as areas, these spaces cannot be visited or battled. 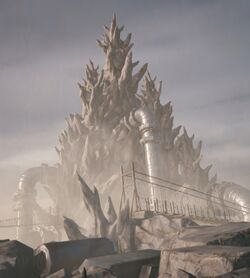 Wol and Cloud arrive at Nibelheim: Cloud's home town. Cloud is not in good shape. Sephiroth's stabbing doesn't seem to be healing, which is odd considering that Wol's wounds easily healed. Whatever the reason, Cloud is in no condition to fight. Wol wants to handle this in Cloud's place. The SOLDIER assents, but gives a warning: there are mako contaminated areas they must cross through. Not a problem for mako-infused SOLDIERs, but Wol doesn't have that benefit. They'll need some Neutralizing Materia to get through these places. 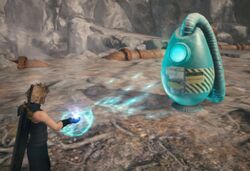 Farther down the path, they find a Jenova Pod that gives them just the thing: a Neutralizing Materia for fire. It also charges up Cloud's Giant Materia just a bit, which has a noticeable improvement on Cloud's condition. More of these chambers ought to help Cloud recover both his health and his memories, as well as getting the Giant Materia charged. Both warriors recognize that the entire scenario was set up by Sephiroth, and it could be a trap... but there's no choice but to forge ahead on this path.

But the path has something new: scattered pages from a journal. It talks about Sephiroth coming with a band of SOLDIERs to save the local town from monsters. Wol considers it just the thing that Palamecia would do to be devious -- leave a trail of misleading clues -- but Cloud confirms it did happen. He was there. Looks like bits of Cloud's memory are indeed coming back.

The duo turn a corner near the top, and find... Sephiroth! Without a word, he throws a Sicarius at them, and he's gone by the time they deal with it. Cloud is convinced that it's not the real one, though, since the true Sephiroth would never stoop to using other creatures do his work. Wol asks if he's changed, but if so, then he's not the same Sephiroth... and he's not the hero that Cloud idolized.

Cloud explains that back then Sephiroth was the greatest of the SOLDIERs, and Cloud was just a recruit. The entire team, and the Nibelheim townsfolk, were in awe of him -- especially that long, sharp sword of his. As more memories awaken, he remembers first that it was just the two of them that came to Nibelheim (plus the grunts) to check the prototype Mako Reactor, and then that there was a third person with them... but the details aren't there yet.

More pages show up on the path. One talks about the need for SOLDIERs to be those rare individuals who are compatible with Mako energy. Incompatible people are destroyed, but a rare type of Mako might act as an incubator in failed experiments "until a copy was generated." That doesn't sound good.

Another page talks about a village girl leading the SOLDIERs, and it clicks in for Cloud. That's Tifa, a childhood friend. She guided the group in to the old Reactor. Echo tries to frame it as a romantic thing, but Cloud doesn't see it -- or remember it -- that way. He does remember Sephiroth being tough, but fair, and wonders what changed him. 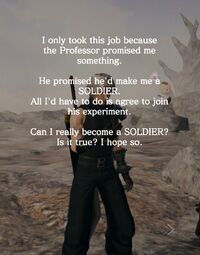 As Cloud nears the end of his Mako absorption, he gets a stronger flash of events. He and Sephiroth found something... bad... in the Mako Reactor, and it left Sephiroth a changed man. Just the memory is enough to make Cloud swoon. And then the memory is gone again. Perhaps this is what Sephiroth wanted Cloud to face...

Yet another page, found on the footsteps of the old Mako Reactor. The SOLDIERs were told to bury the dead, and cover up everything about what had happened there. The writer only wanted to become a SOLDIER, as "the Professor" had promised, as part of an experiment.

So, what experiment? Cloud doesn't know. But Sephiroth is near, and probably has answers. A final page on the ground enigmatically says "I am... Reunion." 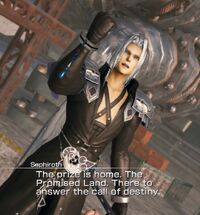 At the end, of course, is Sephiroth. Cloud leaves the fight to Wol, saying this is just an illusion. Fine. Wol takes the illusion out fairly easily. No surprise, then, when the real Sephiroth appears at the end of the fight. Wol points out that back in Midgar, Sephiroth drained the Giant Materia of mako, then gave it back. So what he's really after is the Mako Energy that Cloud has gathered. But Sephiroth says no, he has what power he needs, now. It's time for the full battle with Cloud, for the prize of the Promised Land.

...but not here. He wants the fight to be at the end of a "land lost to despair." Sounds like back where we started.

To be continued, in Fatal Calling Part 3. Back to the Northern Cavern! 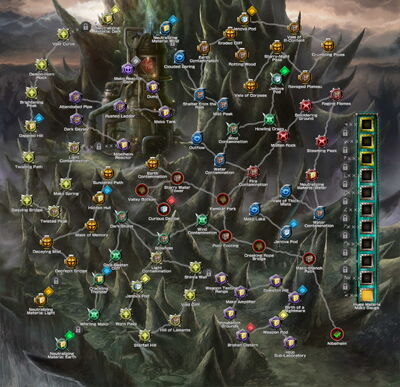 Most areas in the Region are Mako Contaminated areas, keyed to particular elements. You must plug Neutralizing Materia into one of your Materia Plate sockets to enter these areas. As the story progresses, you will receive each Materia as it's needed.

If you have played the event previously, notably the December 2018 instance, then all of your Materia from that previous instance is still with you. This includes the

Neutralizing Materia: Fire (and other elements)! However, the game does not recognize them, and won't show you the paths if you try to go in Contamination Zones before their time.

Follow the expected path to make it work properly:

As an interesting side effect, you'll end up with Lv.2 Neutralizing Materia, giving your special abilities a slight extra boost.