Edit
This article is a stub. You can help Mobius Final Fantasy Wiki by expanding it.

Pleiades Lagoon is a permanent Region of the game. It can be accessed on the World Map, near the Chaos Vortex.

This region is a unique area, in that it has a restriction: you can only access one island group in this region, depending on the weekday. Purchasing a Pleiades Pass from the Item Shop will allow access to all islands for 24 hours. The exception is on Mobius Day when all players are given unlimited access to the region -- essentially a free 24-hour Pleiades Pass. 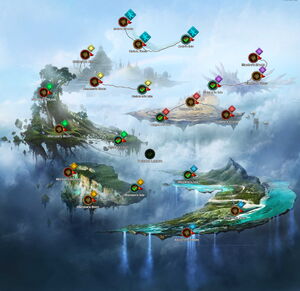 This region has 22 areas, broken up into 7 groups of 3 islands each -- one for each element, plus a

Crystal group -- which allows one region to be open on each day of the week.

Every Area is a teleportation point, except for the initial "Pleiades Lagoon" landing point. However, like other regions, you will need to achieve victory over the "Boon" and "Shade" nodes for them to become teleportation points.

Each group has the same setup of 3 areas: an easier "Isle" area, a more difficult "Boon" area, and a very difficult "Shade" area.