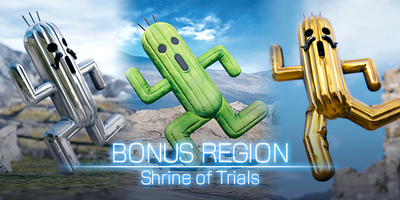 The Shrine of Trials was the first bonus region found in Mobius Final Fantasy, useful as a place for new players to gather

It cost 3 Mystic Tablets to access, and it could only be accessed for 30 minutes. Players were expected to storm the place, hitting as many areas as they could, as swiftly as they could.

The region was closed on December 17, 2018, after the release of the Novices' Hall, New Player Summons, and the Warrior of Light Story Digest offered beginners a swifter progression to more difficult play.

This likely occurs after Chapter 2: Hope and Prophecy.

Wol responds to an invitation from Garland, and shows up here. Garland notes that Wol is progressing nicely, and offers this place as somewhere that Wol can temper himself... and continue growing. Wol is a bit snarky about it, but Garland doesn't mind. Take it or leave it, he says, but make the most of it, since time here is limited. 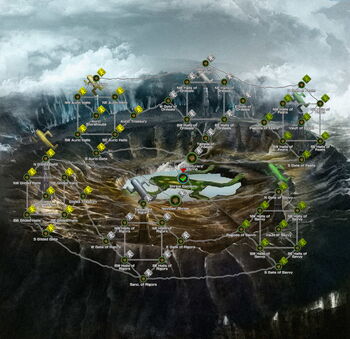 There are two major sections of the Region: Novice on the bottom half, and Adventurer on the top half. Each half starts with a Shrine and then splits into three groups of areas, one for each type of Cactuar.

Novice areas cost 3 stamina and battles feature two skirmishes: one against the "mutant" Dust fiends, and one against the selected Cactuar. Rewards are ★2 and ★3 Cactuar cards, plus the Dust fiend cards (useful for fusion with Life-based abilities).

Adventurer areas cost 4 stamina. Battles are the same two skirmishes, but the first one adds "mutant" Grudge fiends into the mix. These areas drop ★3 and ★4 Cactuar cards.

The Cactuar will only appear on the first clear of an area -- after that area is defeated, only the mutant fiends will show up, in a single skirmish.

There are 51 total areas in the Shrine of Trials. There are no treasure chests.

Shrine of Trials is one of the few ways to reliably get Support Ability Drops. All drops of the Shrine of Trials are of the Life or None elements. Since Life and None Elements can't be used offensively each of the following fiends takes on a random Offensive Element: Fire, Water, Wind or Earth.