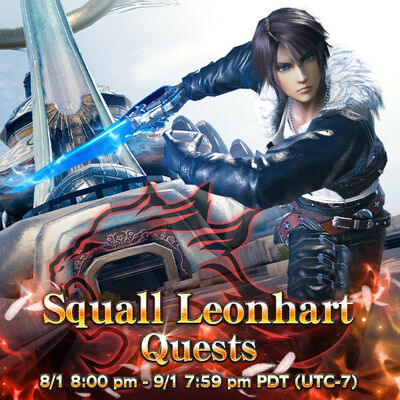 The Squall Leonhart Challenge was a special multiplayer event, featuring battles against Squall (Sicarius). The event is part of the Final Fantasy VIII Collaboration Event, offered in August 2019. 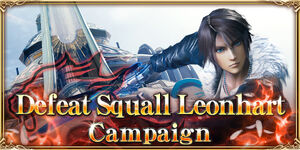 This is a special campaign posted to promote fighting Squall in the Ring of Braves. The more players that defeat Squall on ★3 difficulty or higher, the more rewards for all players on Aug 21. There is a tally board tracking the number of victories placed next to Meia in the Ring of Braves. 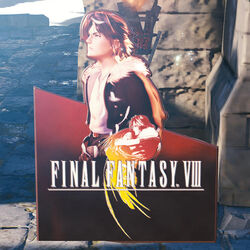 Total victories reached 290,000, so double awards were handed out on August 21.

All players who log in during August 2019 will receive:

Players who have bought at least 12 Mobius Gift Boxes will receive:

These can be equipped in the Social Tab: Edit Stamps.

Using one of these stamps during a battle in the Ring of Braves will revive your character from death with no penalty. It's a free

Defeating Squall gains special event-only Components, tradable at the Item Exchange in the Ring of Braves for special prizes:

Any Squall Quartz you still have one week after the end of the campaign will be changed into other fire-based components.