The Supreme Ticket is one of the Items in Mobius Final Fantasy.

Supreme Tickets are used to get a guaranteed Supreme Card or Ultimate Hero job, during specific promotional periods.

Supreme Tickets are typically handed out as a special reward once a year. 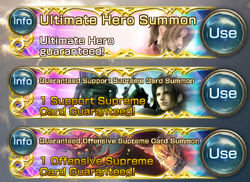 During the month that these tickets are obtainable, up to three extra banners show up: the Offensive Supreme Card Summon, the Support Supreme Card Summon and the Ultimate Hero Summon. Each of these will consume one Supreme Ticket, and will run a one-Card Summon with a guaranteed card of that sort from the ones you do not already have.

If you already have all of the Ultimate Heroes, then you will receive a

If you already have all of the Supreme cards, then you will receive a

Growstar instead, plus your Additional Slot Supreme Card Chance (at the bottom of the Summon Cards page) will be boosted to 180, giving you a 100% chance of landing the next Supreme Card as soon as it's released.

If you do not use the Supreme Ticket before the month's Summons run out, we assume that the ticket will be held until the next promotional campaign, but this is not guaranteed. Use it before the promo ends!