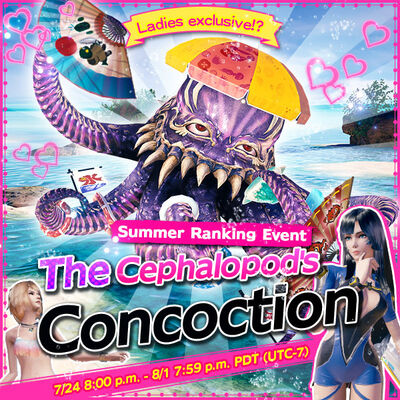 The Cephalopod's Concoction is a Ranked "battle tower" event available in July 2018, as part of the Summer Resort event series. It features solo battles against Ultros and Typhon... again! As a new twist, this contest is only playable by the female characters in the game.

For those that haven't obtained them through the main storyline, starting this event will get you: 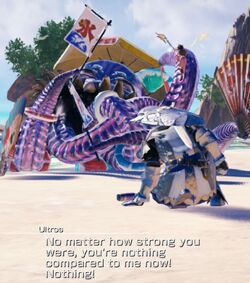 Wol is down! He's barely able to keep from passing out, as Ultros swims up out of the sea, proclaiming that Wol has fallen for his cunning trap!

Apparently, Echo found what looked like a can of soda on the beach, and handed it off to Wol. It just looked so refreshing... (rather surprising, since the can has a picture of Ultros on its side) Instead of a nice drink, it's Ultros' own special brew of ink! Wol is seriously annoyed, Echo is nervous, and Ultros is gleeful. The octopus moves in for a long-desired kill.

But the kill doesn't happen. Ultros is smacked away with a shot from Sarah's bow. She and Meia have appeared just in time. Faced with foes that aren't helpless, Ultros beats a hasty retreat.

It's obvious that Wol has been either poisoned or cursed. Perhaps rest will cure this... or not. Wol is in no condition to fight, so the ladies take it upon themselves to get some answers from the conniving cephalopod. The hunt is on! 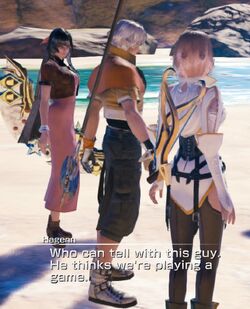 Ultros sneaks back to gloat at Wol. Those who cannot fight are forgotten... so Wol's on his way out! Wol would be just as happy if the octopus would forget him... and then Sarah nails Ultros in the forehead with an arrow. Ultros is visibly upset, yelling about how his turn was active, and shooting him during his speech breaks the rules. Sarah is extremely confused.

The seven-tentacled octopus (septapus?) tries to make nice with the ladies. He notes that both he and Meia came from the sea... doesn't that make them kin? Meia is NOT pleased with such a thought, and hits him... hard. Repeatedly. Appeals to Sarah just gets the cephalopod shot with more arrows. Since that's not working out, he finally decides it's time to call in his own friend -- yep, it's Typhon (with a festive bow tie and top hat!).

Typhon isn't really interested in helping Ultros anymore, but Wol asks him to help out, and Typhon relents. Such compassion! Ultros has a friend... and the ladies have more chances to beat them up. In short order, Ultros is ready to tag out and leave the fighting entirely to Typhon, but some extra taunting from Wol keeps the cephalopod fighting on. After a major amount of walloping, Utros waves the white flag. With the fight over, Typhon quickly makes friends with the ladies, offering them his respect and sympathy. Ultros sees a last opportunity, and reaches for the helpless -- and undefended -- Wol. Oops... not so helpless! Wol kicks the surprised octopus completely off the beach.

The entire gang smiles in amusement. Wol never did drink the soda can. (I guess he did recognize the label!) The entire thing was a ruse on Wol's part, and everyone knew it except for Ultros. What a great opportunity for the ladies to get some combat practice in. It's tough being the only one on the outside of a joke, but Typhon states that's just an aspect of life that Ultros will have to get used to. 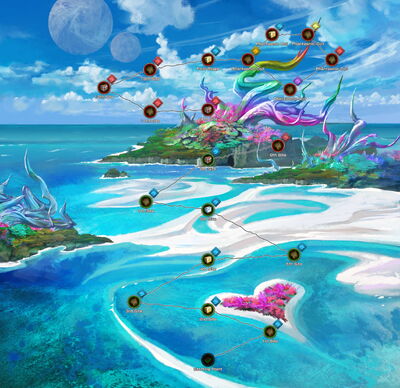 The player must have a female job equipped in both the main and sub-job spaces, or the area will be blocked before it can be started. Ultimate Hero Jobs Lightning and Y'Shtola can be used, and will cover for ANY valid job in the game -- the important part is the female appearance!

The player progresses through the first 14 "Site" areas in a linear fashion. Each level features increasingly powerful foes. Every level in these first 14 features Ultros as the final foe. Areas can be revisited as long as the player is still standing on them, but Ultros only shows as a final boss once for each area.

Odd-numbered areas cannot be revisited once the player steps off of them, but the even-numbers areas CAN be teleported to, so the player can collect Summer Break Ultros (Card)s, and possibly Professor Alraune (Card) through re-plays.

After completing the initial 14 areas, the player enters the "Phantasmic Coil" areas. This is a set of 5 areas that repeat in an infinite loop, also with an increasing difficulty with each area finished.

There are 20 areas and 8 treasure chests. Since the last treasure chest (in the Phantasmic Coil) automatically regenerates, the region can technically never be completed.

All areas carry the warning "Only

Along with the treasure chests,

Professor Alraune, who can drop a new "Ultimeh" card: Professor Alraune. This is a Monk card, meant as a lesser form of Duncan. While not as powerful as a Supreme Card, it still packs a punch.

The can of soda at the beginning of the event has a picture of Ultros on its front, with the name "Orthros" printed below it. The two names are synonymous in Japan, and Orthros has appeared in Final Fantasy I.