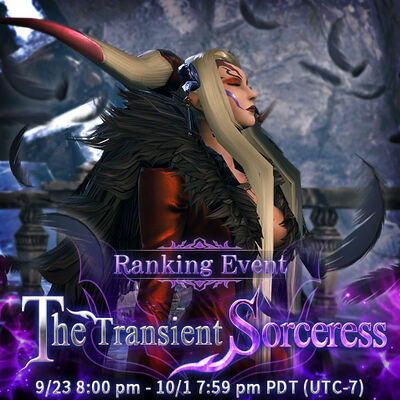 The Transient Sorceress is a Ranked "battle tower" event offered in September 2019. It features a progressive battle against Ultimecia. This is the final event in the Final Fantasy VIII Collaboration Event, and is considered an epilogue to The Sleeping Lion.

The region will be open to experience until the end of the Final Fantasy VIII Collaboration Event, but will only offer the ranked competition for the first week. 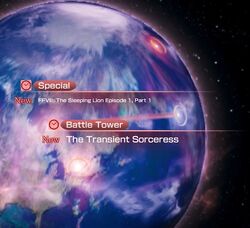 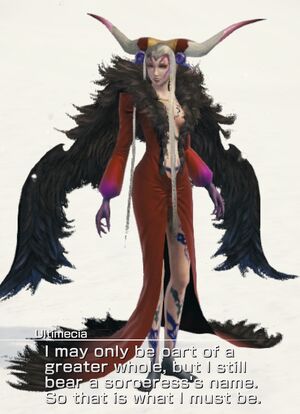 Wol finds a shadow of Ultimecia... in Castle Ultimecia, of course. She is still determined to make Time Compression happen, and bring an end to all things... unless a hero can stop her. Wol says he's no hero, but he'll stop her anyway. She's ready for it.

After some sparring, Ultimecia notes that Wol certainly has the strength worthy of a hero. Wol still protests the title, but the shadow insists that the world has given him that role, and he cannot escape it. In the same way, she knows she is just a shadow of the real Sorceress, but will still play the part that fate and the world has forced upon her. To that end, she will push to be feared in her own right, knowing that the Hero will eventually take her down.

Play in this area works up a single chain of levels, from the beginning Primordia level up to the top Ragnarok level. As you work your way up the tower, the battles at each level will get progressively harder.

This event includes the use of the Draw System introduced in The Sleeping Lion. Foes have been balanced to expect this, so difficulty will ramp up VERY QUICKLY. You are HIGHLY encouraged to go finish off as much of that storyline as possible, or you will not get far in this run.

Ultimecia starts with a primary element, then shifts to her secondary element (Light) at 75% HP, then primary again at 50%, then Light again at 25%.

She will frequently summon Guardians to her opposite her current element, then draw powerful spells from those Guardians. It pays to break or kill them, unless you go with a nuke the boss as fast as possible strategy. One nice side effect is that you can draw from those Guardians, too, so you can possibly match her spell for spell.

Time Limit icon on her status bar, which reduces by 1 with each turn she takes. When this count gets to zero, she casts an unavoidable super-attack that WILL kill you, ending the fight.

At the start of each of her turns, she also announces a countdown to her Ultimate ability, Time Compression. 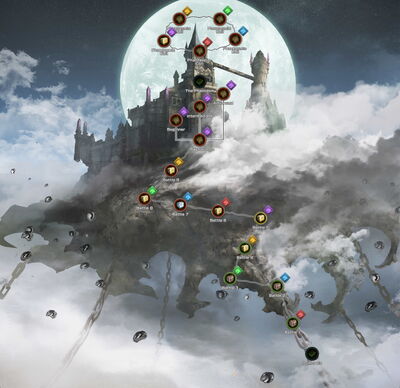 The region has one path with a staircase up, leading up to the top at the 10th level. You cannot return to previous areas once they've been beaten.

After completing the Ragnarok area, you enter the "Phantasmic Coil" areas. This is a set of 5 areas that repeat in an infinite loop, also with an increasing difficulty with each area finished. On these levels, there is no fifth Rental Card allowed, and if you lose, you cannot use

However, there is a new addition, starting with this month. When starting the Phantasmic Loop, you are offered three spaces. These are shortcuts that will allow the better players to skip ahead to the high-difficulty loops without needing to slog through the lower-level stuff.

The skirmishes here have a pre-set collection of fiends, but after the 35th kill they will change to other fiends, and again after the 85th kill. The third skirmish always remains as described.

Anyone who completes the first level should make it within the top 20,000 players. It will require a run or two through the Phantasmic Coil to breach the top 10,000.