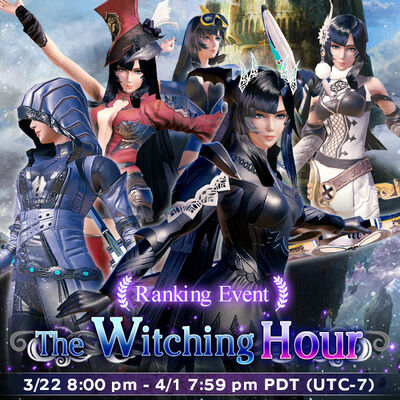 The Witching Hour is a Ranked "battle tower" event available in March 2019. It features a face-off with Meia, in some of her newer job classes.

In layout, this is the standard progressive tower event in the Tower of Trials, similar to the I vs. I competition in January. The main restriction here is that you must use either Meia jobs or Ultimate Heroes to fight. 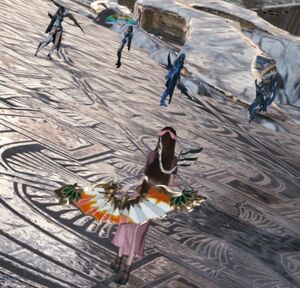 Meia is stepping through the Tower of Trials, bored, when she is confronted by... Meia?? It seems the Tower, or Palamecia has decided to have her confront herself. Much like Wol's own experience, the Tower has a cluster of Meia's aspects her to challenge her. One steps forward.

At first, the two just bandy words between them, talking about the thanks they have to Wol for helping her -- them? -- to become stronger. But is that all there is? Each Meia demands answers about the other's true feelings but neither is willing to give anything. They both quickly get annoyed with the wordplay and evasive answers of the other, and they agree that the best thing is for the superior one to force the answers from the other. The fight is on.

Players in this area must use a Meia job in both the primary and secondary decks to be allowed to play. But there is a loophole - if you use an Ultimate Hero job card, you can set any job you like to it, Meia or not. The first selection screen will only show you the job sets that meet these requirements, or you'll get a denial message if you have none. Go set up your jobs!

Meia will have a set of orb icons on her status, indicating how many elemental orbs she has. As she attacks, these will fill up, and she will use them to cast abilities at you. Hitting her with opposite element attacks will reduce the number of orbs he has.

The end of his status bar also shows her Ultimate Gauge. When this fills to 100, she'll hit you with the same Ultimate Ability you'd expect for that Job. You can delay this by hitting her with non-elemental attacks while she's Broken, and during your own Mobius Zone periods.

Finally, every few turns Meia will switch from an Attacker role to a Breaker role, and a few turns later, back again. When she does, her elemental affinity will shift, and she will switch to a different set of Abilitites. (just like your own Job Change Shift) 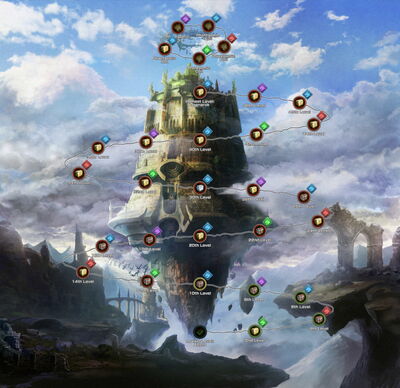 The "ladder" consist of 20 levels, but only 25 actual areas. As you progress, the previous areas become inaccessible -- you can only go up.

The skrimishes here have a pre-set collection of fiends, but after the 65th kill they will change to other fiends. The third skirmish always remains as described.

The game awards The Azure Witch job card to you at the beginning of the contest, maxed out, if you have not already obtained it from Act 1, Chapter 6! This guarantees that all players can participate, regardless of experience or Job collection.