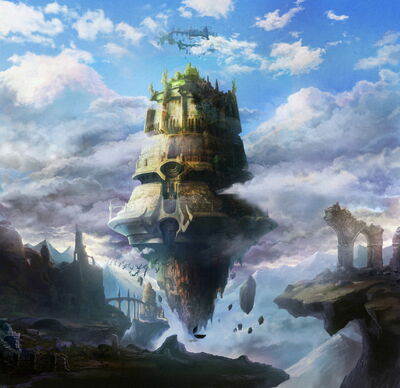 The Tower of Trials is a region close to The Rift: the space where things -- and people -- from other worlds creep into the lands of Palamecia. It is the usual location for the 1-week Ranked Events held monthly in Mobius Final Fantasy. Players are encouraged to climb the Tower as far as they can, and prizes are offered to those that climb the farthest.

The Tower typically has one winding path from the bottom to the top, consisting of up to 50 levels. Typically, at every other level there is a platform to fight the currently featured enemy in progressively harder battles. At the very top is a loop of 3-5 levels called the Phantasmic Coil, where players can fight ever tougher battles in an infinite succession.

Each appearance of this tower comes during the final week of the month, under various event names. It is almost always found on the World Map as a branch off of the red "Specials" hub.

Wol runs across this space soon after the beginning of his journey. He finds the place run by an enigmatic gentleman named Voyd, who is the amalgamation of all the unfulfilled desires of those striving to be the Warrior of Light. Voyd presents a simple challenge: beat the Adamanterrapin, which Wol does handily.

Wol is a bit surprised, though, when a return to the Tower is met with Voyd's death. The tower is taken over by a new antagonist: the Azure Witch. She's a heretic, and she's fascinated with Wol. The Witch already finds Wol the most serious contender for the Warrior of Light position, and certainly the most intriguing, so she throws a few challenges of her own at our hero, in the form of Dahaka and Omega.

The Tower falls silent for a while, as Meia the Azure Witch finds a more suitable challenging ground at the Ring of Braves, but Wol keeps a close watch on the Tower's activity. Good thing, too, because it means he's on hand to deal with the likes of the Tonberry King, Ultros, and Gilgamesh.

Wol's companion sprite Echo sees an opportunity, and takes over the Tower herself. It's a great place to come up with her own creative challenges, including the Guard Scorpion Mk.0, Ifrit and Shiva.

The Tower continues to be a place where beings from across the Multiverse unexpectedly show up and cause trouble. Wol, with his success achieving the mantle of Warrior of Light, continues regular patrols there. 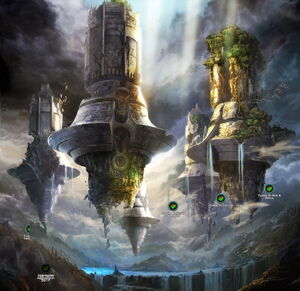 In some cases, the fiends out there have staged a rematch of sorts, consisting of 6 previous Ranked Events combined into one. In these cases there are 6 towers to climb, each with their own Phantasmic Loop, but each tower only has around 10 levels to reach the top.