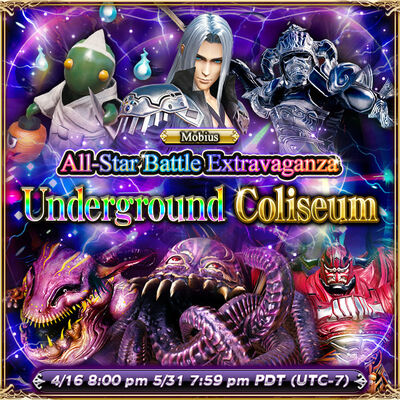 The event is part of the Mobius All-Star Battle Extravaganza, and a continuation from the Ultimate Coliseum. 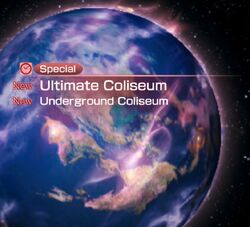 Go to the Underground Coliseum region spot on the Act 2 World Map.

Continued from the Ultimate Coliseum

Gilgamesh wants in on the contest! He's every bit the equal of the heroes gathered here... at least in his mind. He's brought friends, too, and he's offering a special prize: Excalipoor, one of his most favoured swords. Wol isn't that interested, since he's already won Excalibur in the Tournament, but Gilgamesh dangles lots of other loot in front of him to get his attention.

No preliminaries, no qualifications. We're done with that. Straight into the fighting!

The fights are what you expect. (hello again, Ultros!) Sephiroth shows up here, too. (Is he hero or villain?) But the star spot is, of course, Gilgamesh. It doesn't matter, though: Wol comes out on top of everyone.

As things come to a close, Wol pulls Gilgamesh aside. He seems to be spending a very large amount of time in Palamecia. Is the famed vagabond settling down? Gilgamesh avoids the question, but eventually admits that he's spent so much time here, it feels like home. He'd love to join the cast. He could even be a main character in this story! Wait until folks get a load of his Ultimate!

Wol doesn't think it's a good idea, but it's not his position to say. He'll beat down Gilgamesh just as much in any circumstance. And so the battles continue, as long as they're both still standing. 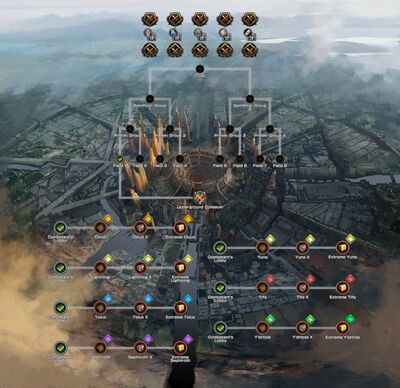 There are 54 areas in total. There are 29 treasure chests, but 5 of them recharge. This is an arena fight, so you can only visit 5 of the Tournament areas at a time -- the other 11 cannot be visited, but are marked as complete once the Master tournament is finished.

Spaces are broken into three rough groups: The Main Tournament, the Challenge Areas, and the Treasure areas.

There is no stamina cost for each area. Instead, there is an "entry cost" for each attempt, with one battle at each level. If you lose one, you start over at the Underground Coliseum area. Costs are:

The foes on these levels are randomized between the 7 starting positions, so the foe you face at each level will be equally random.

Once you've completed the Master difficulty of the Main Tournament, these areas open up. The bosses are extremely strong.

In addition, there is a strong suggestion that Squall will be added as a foe in the Oct 2019 instance!

The top 5 areas offer a number of prizes in exchange for the Victory Blazons you gather. Some are only obtainable 3 times, while others can be repeated an unlimited number of times.