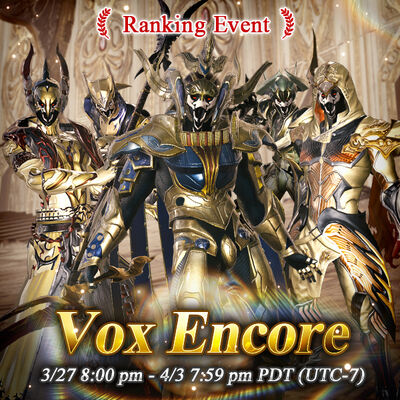 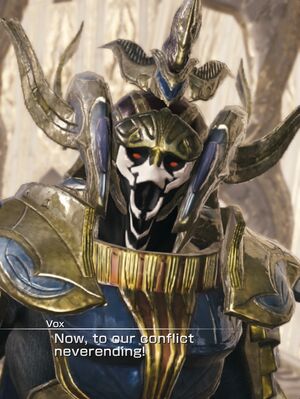 Vox is back... and he's in the Tower of Trials! He's taken Wol's lessons of hope to heart, and found his own: to defeat our heroes! And with that, Vox reforms himself into 8... 10... 15 different forms, at the same time! He'll never be a memory.

Players in this area must use specific Job Types in both the primary and secondary decks to be allowed to climb each of the five ladders. You'll get a denial message if you don't have a valid deck. Go set up your jobs!

Play in this area progresses up each tower, from the starting Character level up to the top Ragnarok level. As you work your way up the towers, the battles at each level will get progressively harder.

Each area has two skirmishes:

Vox has a set of orb icons on his status bar, indicating how many elemental orbs he has. As he attacks, these will fill up. If any element gets above a count of 4, Vox will cast a more powerful attack on the next turn in that element. However, he loses all of his stored elements if you Break him.

His status bar also shows an

Ultimate Gauge. When this fills to 100, Vox will hit you with an Ultimate attack. A full HP bar and

Wall II will be important to survive these. He starts out with this Gauge at 99, so break him quickly!

When Vox's HP goes below 50% he will gain

Perfect Defense to overcome any Break state, then switch to a different element (the second one listed) with a more powerful set of attacks. He also refills his Ultimate Gauge!

There are five different towers, with five areas each, offering different bosses -- and a different restriction -- on each tower.

Players can choose to teleport to or "climb" the towers in any order, but cannot revisit areas that have already been defeated. (except for the immediately previous area as a teleport spot, but this area will not have the boss foe)

Each tower then concludes with its own infinitely looping "Phantasmic Coil" area. For first four towers this is a set of 3 areas that repeat in an infinite loop, also with an increasing difficulty with each area finished. On these levels, a Prize of

Ability Ticket x5 is handed out for each loop completed.

When starting the Phantasmic Loop, you are offered three spaces. These are shortcuts that will allow the better players to skip ahead to the high-difficulty loops without needing to slog through the lower-level stuff.

There are 58 total areas across 5 towers, with 15 treasure chests. Since the last treasure chest in each tower (in the Phantasmic Coils) automatically regenerates, the region can technically never be completed.

This tower features battles against Vox (Mage). Players must go in with a

Meia job on both the Main and sub-Jobs. Any Ultimate Hero is valid except for Princess of Dusk (Hero), Dawn Warrior (Hero) and Archfiend (Hero).

This tower features battles against Vox (Ranger). Players must go in with a

Sarah job on both the Main and sub-Jobs. Any Ultimate Hero is valid except for Dawn Warrior (Hero) and Archfiend (Hero).

This tower features battles against Vox (Warrior). Players must go in with a

Warrior job on both the Main and sub-Jobs. Any Ultimate Hero is valid except for Princess of Dusk (Hero), and

This tower features battles against Vox (Monk). Players must go in with a

Sophie job on both the Main and sub-Jobs. Any Ultimate Hero is valid except for Princess of Dusk (Hero), Dawn Warrior (Hero) and Archfiend (Hero).

This tower features battles against Vox (Warrior). Players must go in with a

Graff job on both the Main and sub-Jobs. Any Ultimate Hero is valid except for Princess of Dusk (Hero), Dawn Warrior (Hero) and Archfiend (Hero).

As a last hurrah, there is one final battle against Vox at his strongest! In order to gain entrance, you must first complete all five towers, plus you need to complete the Mobius FF Developers' Room and obtain the

Vox starts with a

Light of Hope boon that protects him from attacks for up to 12 turns. You'll need to overcome this to get anywhere. Also, at 50% health, Vox conjures four Elemental Support crystals to help him, and recharges his Light of Hope boon. This is a titanic fight!

The game awards the starting job cards for non-WoL characters to you at the beginning of the contest, maxed out, if you have not already obtained them from other sources. This guarantees that all players can participate, regardless of experience or Job collection.

Each area cleared rewards the player with a

After completing all 5 Ragnarok nodes player will receive:

The typical Ranked Event rewards were offered in the first week of the region's appearance. While the region is playable until the end of service (3 months' time), this is "exhibition" play only, and does not offer ranked rewards.

Because of the impending shutdown of the game, participation will be very low, so anyone who completes all of the normal levels should easily make it within the top 10,000 players. The top 2,000 players will get