Yojimbo, the Blade of Vengeance 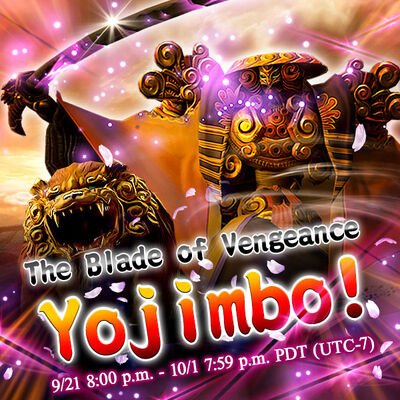 Yojimbo, the Blade of Vengeance was a Ranked "battle tower" event available in September 2018, as part of the Final Fantasy X Collaboration Event. It features a challenge with progressive difficulty from the Aeon 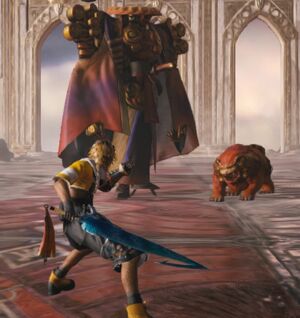 Wol is making his normal rounds through the Tower of Trials, when he is ambushed by a highly stylized samurai. Wol recognizes him immediately -- it's Yojimbo, the wandering swordsman, spoken of in whispers throughout the multiverse beyond the Rift. Wol finds it a bit dishonorable to have been attacked from behind, but quickly realizes that it was a test to find out if Wol is good enough for Yojimbo's purposes.

What purposes? It turns out Yojimbo wants a training partner... and he's willing to pay! But it's a two-way payment -- the swordsman will ask for his own price with each fight. The two come to a swift and amicable arrangement. Payments are nice, but the direct challenge of battle against a formidable opponent: that's the REAL prize.

At first, the fights seem relatively easy. Wol suggests his foe is not all that strong, but Echo counters that they both have been holding back. As a good mercenary, Yojimbo won't do any more than is necessary in each fight. Fine, says Wol, the gloves are off and it's full battle strength. There's some bickering between Echo and Wol over whether the fighting is really its own reward, or it's just a way to get more loot.

At the top of the tower, the contest finally devolves into insults, and the two warriors face off in a final confrontation, no holds barred. It's decided in a moment, with one dramatic slash from both players... and it's not even close. Wol emerges as the better swordsman. Yojimbo acknowledges the superior warrior, and is ready to declare Wol his Master, but Wol refuses. Yojimbo would still want to be paid for his efforts, though he says he only wants Wol's gratitude, but Wol won't give it. He suggests that the two of them should walk their separate paths, and each should be grateful for the chance to fight a real opponent. The wanderer HMPH's and calls him a cheapskate, but agrees that they can continue dueling as long as it's worthwhile to both of them.

The first part of each battle is fairly common, with the usual sort of foes: Dust fiends, bombs, and later sub-bosses. Be careful when fighting against the Flans here, because killing a Flan without Breaking it first will get you a 6-turn Ailment.

The final fight for each area is against Yojimbo. Each turn against him starts with Yojimbo's payment -- all of your

life orbs! If you meet his demands, then you get a light tap of an attack. The less you can meet it, the stronger the attack is.

If a turn starts while Yojimbo is broken, he treats it as a Zero Orbs offering, and throws his strongest attack on his next (actionable) turn. Make sure that you either kill him in one turn, or keep him broken!

Offering more than he demands gets you nothing extra, but he takes them anyway.

Yojimbo's demands steadily increase as you work your way up the Tower. At first it's only 3 orbs per turn, but by the time you reach the top it's increased to 9 per turn. Cycles through the Phantasmic Loop demand 10-12 per turn! It's a very good idea to have a weapon that offers Life Draw, a Heartful Egg, or an Ability Card with Heartshift.

Starting around Level 20, Yojimbo's companion Daigoro gets involved in the fight, acting in place of Yojimbo while he's broken, and later getting turns of his own. On each turn he'll cast Howl, which will dispel one of the ailments cast on YJ. If there are no ailments, then Daigoro will cast 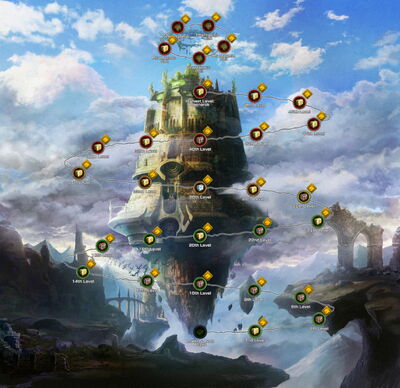 The region is the standard one for the Tower of Trials -- one path with a staircase up, and a platform every 2 levels, leading up to the top at the 50th "Ragnarok" level. The play difficulty increases slightly with each area cleared. Players can teleport back to the 10th, 20th, 30th, 40th, and Highest levels once they're cleared, to face them again and watch those areas' cutscenes.

There are 31 areas and 26 treasure chests. Since the last treasure chest regenerates on each pass, the region technically cannot be Cleared.

Every area comes with the description:

life orbs and see what happens!

On each fight, you also have a rare chance to get a copy of

At the same time as this tower battle, Square Enix also held a Twitter Campaign, announced on Facebook.